Across Asia capitalism does not need replacing but must be reshaped if it is to meet the needs of all its people. There must be constraints on consumption, with externalities priced in and, where necessary, with curbs on certain resources. Only then can economies run in ways that ensure everyone has fair access to the resources they need. This can ensure everyone has a future beyond the 21st century.

All forecasts miss their mark. After all, a book written 200 years ago imagining today's energy needs would discuss coal, but oil, gas and even electricity would not feature in the index. Most of the discussion would probably be devoted to the looming problem of hay scarcity.

Good advice for the budding forecaster is not to try to fix things that are necessarily in flux. Avoid talk of time bombs, and steer clear of predicting the end of anything – wars, resources and certainly not history. And try not to peer too far into the future, or you’re very likely to fall flat on your face.

I don't know what next hour will bring in. Let alone tomorrow or next century.

But I am going to make one forecast: A lot of Indians will continue to struggle for water (पाणी) in year 2112. More so than they today.

Cory Doctorow says: "science fiction writers don't predict the future (except accidentally), but if they're very good, they may manage to predict the present."

James Lovegrove says: "Contrary to received opinion, science fiction’s preoccupation has always been the here and now. Its far-flung planets and future timelines are merely a way to analyse the contemporary. In this respect, it is the most politically engaged of all literary genres. Motifs that may appear trashy to the uninitiated - space exploration, extraterrestrials, futuristic technology - can in fact be surprisingly sophisticated tools for dissecting and examining the world as it is."

My favourite the late Mr. Handelsman puts it even better: 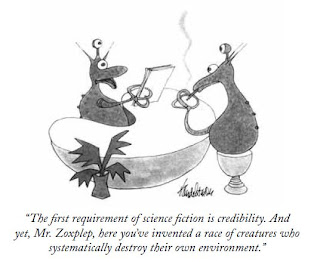 "The first requirement of science fiction is credibility. And yet, Mr. Zoxplep, here you've invented a race of creatures who systematically destroy their own environment."

A good Marathi science fiction is waiting to be written that has earthly water at its heart. There is "Less Per Capita Waterworld" ahead of us before "Waterworld", 1995!

(Another waiting scifi, inspired by J G Ballard's 'Crash', is "Death on the Wrong Side / Pune Road Odyssey 2012". More on this later.)

In 2011 it rained copiously in Pune. We soaked in the beauty of overflowing of Katraj (कात्रज) lake from our flat on many days. And yet Pune is struggling for water in March 2012 itself.

Such struggle always brings to my mind summer of 1983 at IIT, Madras. There was such a scarcity of water on the campus that students used to go from hostel to hostel looking for it.

I said: This gives one more excuse to these "The Best and the Brightest", would-be masters-of-the-universe to migrate out of India! (Year 1983 was one of the toughest to get US student visa. Still they escaped in hordes. I remember one BB / MOU joining IIM-Calcutta only to lie in wait to get the ultimate visa little later.)

Then you could spot many deer on the campus including just below my room at the hostel named after mighty river Brahmaputra. They were so desperate for water and food that they almost ate anything. Their favourite was Surf washing powder carton box!

True to its name, my hostel always used to have some water!

In 1989-92, I saw a lot of poverty on the footpaths of Kolkata but I always thought that in one aspect they- atleast those on Hazra road- were luckier than their counterparts in most parts of urban India: abundance of water. Going to Hooghly river front and seeing that mighty flowing river in summer- compared to dry river beds of most Maharashtra rivers- always brought a lot of solace.

I once wrote to Amitav Ghosh after reading his 'The Hungry Tide', 2005 that I liked it more because there's so much river water in it than inscrutable Irrawaddy dolphins in them!

Look at the smiling kid in following lovely picture.

He is wearing a tie, now, after/before the school, tucked away on his back so that it does not hinder him in his work. He probably goes to an English medium school. With a bit of luck, when he grows up, he will get a job in India's sunrise industries.

There is a spring in his step. What is he doing? He is running with empty water vessels to fetch some water. I am going to call him Panini (पाणिनि)! It's a pun on word पाणी (water)...Someone who has no water or Someone in quest of water.

100 years from now, whatever else happens, you will find many Panini's in Pune. 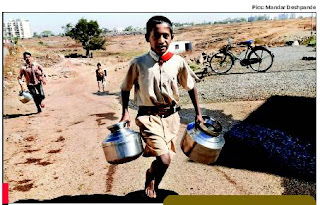 "...When “The Death of the Earth” begins, the seismic shocks are increasing in intensity and water is growing scarcer and scarcer. But one man, Targ, refuses to surrender to the general lassitude and dreams of a renewal of civilization..."

"India has the world’s largest water infrastructure, but the poorest water delivery system in the world. On World Water Day 2012, water experts are demanding a dramatic revamp of the present water management strategy..."

"For Ballard, who died in 2009 at the age of 78, the true horrors of our collective future don’t concern what might happen hundreds of years from now in a spaceship; rather, they reverberate in the very ordinary now-ness of freeway overpasses, sports stadiums, high-rise apartment complexes and gated communities."

...and water filling stations, city roads...
Posted by Aniruddha G. Kulkarni at 9:00 AM No comments: