“A Teardrop on the Cheek of Time”, Taj Mahal will remain. Stop being rabid.

The biggest threat to humanity never was global warming but always rabid nationalism of some kind and it will always remain so. History has many exhibits- Napoleon, Hitler,American Empire since 19th century etc.

Educated Indians are exhibiting more and more rabid nationalism by espousing causes like religion (“if Islam has become little loud at few places in the world, others too should”), national borders (“China cannot even mention Arunachal Pradesh”), Cricket (beating Pakistan is the greatest glory), language (“Is Pratibha Patil- aspiring President of India- ‘Marathi’”?), river-waters (“not a drop to neighboring state let alone nation”), historical-figures (“how can a white man even mention Shivaji?”), tracking every move of astronaut Sunita Williams because she has Indian roots and many, many others.

The latest to join the long list is The Taj Mahal. Indian Media want Taj to make it to the list of Seven Wonders of the world. As usual they have become hysterical and cacophonic.

I wonder why it should matter. People will continue to either love it or dislike it (there are many such). Either way, they will flock to see it. For me the greatest thing about Taj was finding it where I did. Very unexpectedly. Suddenly. Out of nowhere.

I don’t know how many of us realize it but Shivaji might have seen Taj when he famously visited Agra in year 1666. I mentioned this to the Late D G Godse द ग गोडसे, one of the greatest art critic, artist and historian who wrote only in Marathi. Remember, Godse has written extensively about aesthetic beauty of Fort Raigad’s (seat of Shivaji’s small kingdom) architecture in his book “Shakti Saushthav” (Popular Prakashan 1972). Godse wrote back to me that Shivaji must have appreciated beauties of both Raigad and Taj.

Diana and Michael Preston has recently published a book on Taj- “A Teardrop on the Cheek of Time: The Story of the Taj Mahal”. It has been reviewed quite favourably in FT and Guardian.

Some interesting tidbits from the reviews.

“……. Even in her late thirties, when most women were considered ”too old for sex”, Mumtaz had an enduring appeal: Shah Jahan impregnated her 14 times in the 19 years before her death (in childbirth) and she had available to her a number of techniques to ensure that her madan-mandir (temple of love), ”slackened by constant pregnancy”, we are told, contracted to enhance Shah Jahan’s pleasure……Fulfilling Mumtaz Mahal’s deathbed request (”build for me a mausoleum which would be unique, the like of which is not on earth”) took almost 20 years, stretched the finances of the 17th-century’s richest monarch and diverted his attention from the business of governing……… In later life, Shah Jahan’s voracious sexual appetite returned as memories of Mumtaz faded. The authors, optimistically perhaps, suggest his later pursuit of loveless sex and ”debauching of his courtiers’ wives and daughters represented a fervid quest to prove that Mumtaz Mahal had been unique and worthy of a unique love”.

……Over time the Taj was neglected, vandalized. Finally Lord Curzon, the British viceroy, undertook a major restoration. It was, he said, ‘an offering of reverence to the past and a gift of recovered beauty to the future’. But the future brings its own dangers: the biggest threat now comes from pollution, and the moisture-laden breath of tourists. When we visit the Taj and sigh in admiration, we are helping to destroy it.”

Although as D D Kosambi (year 2007 is his birth centenary) has argued in his numerous writings, life of common people in India has not changed much through so-called golden ages or dynasties,Shah Jahan was 17th century’s richest monarch in the world.

Yes, ma'am he did not need any aid to build The Taj! 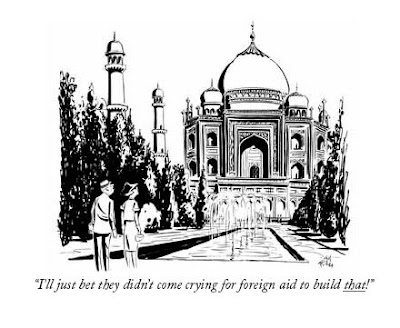 Artist: Ed Fisher The New Yorker 25 Aug 1962
Posted by Aniruddha G. Kulkarni at 9:30 AM No comments: Links to this post