Imagining Remnants of an Army after Panipat 1761: Precious As Bhausahebanchi Bakhar

“I’ve learned that life is one crushing defeat after another until you just wish Flanders was dead.”


"It seems to me that what most people mean by "peace" is victory. The victory of their side. That's what "peace" means to them, while to the others peace means defeat."


Manan Ahmed Asif has done a review of William Dalrymple's latest book 'Return of a King' for Caravan Magazine. Read it here.

I was drawn in by the picture there. 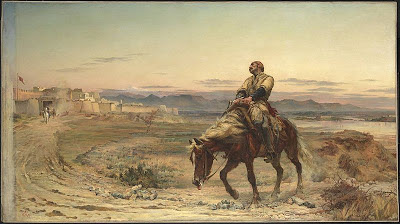 William Brydon arriving at the gates of Jalalabad as the only survivor of a 16,500 strong evacuation from Kabul in January 1842.

By the way Mr. Brydon was NOT the only survivor!

"Many hundreds of the nearly 17,000 troops and civilians who evacuated Kabul—only 700 or so were British nationals—had survived. Hundreds of the indigenous infantry (sepoys) were captured and sold into slavery by Afghan troops. A number of British officers and their retinues were taken as hostages by the warring princeling Akbar Khan, who led the main force against the British. The memoirs of the British survivors and some of the military testimonies of the sepoys were subsequently published and debated, and were commonly known truths of imperial London. Hence Butler’s decision to project Brydon as a sole survivor was less documentation of fact and more a comment on the high price that this frontier region could extract from the Empire. Butler seemed to want to ensure that the general euphoria about imperial aims in Afghanistan was tempered by a recognition of past setbacks. Her painting of Dr Brydon, who had died in 1873, was not a condemnation of war, but rather a warning, a plea to learn from mistakes.

Butler’s depiction of the first Anglo-Afghan war went on to become the basis of a long-enduring myth on the futility of imperial intervention in Afghanistan, an image of the hubris of colonial imagination in the high steppes of Central Asia, providing inspiration for those who wanted to do empire ‘right’. The image, which started out as a warning, transitioned over the years into a convenient hook for all manners of florid fantasies of power and imperial rule—adorning book covers and plates in tome after tome."

But it doesn't matter in appreciating the tremendous beauty and moving power of the picture. Such pictures define an event like nothing else does.

After seeing it, I started wondering if there is a single picture of such quality depicting an event, particularly a defeat,  from Maratha history.

I don't think so.

Imagine what a picture it would have been, had it depicted retreating Maratha army from Panipat on the starry night of January 14 1761? It would have been as precious as 'Bhausahebanchi Bakhar' (भाऊसाहेबांची बखर) c 1762/1763.

(Sadly there is not even a great poem in Marathi on Panipat 1761.)

Going back to the picture,  Mr. Asif says: "Against a distant and barren landscape, the painting foregrounded a hunched figure atop a tired, almost dying, horse, while a rescue party was seen charging from a fort. The painting was unveiled at a time when the Empire was engaged in the second Anglo-Afghan War and the mood was rather boisterous.
Butler framed the war through both text and image—the title “Remnants of an Army” endowed a sense of tragedy to the lone figure, and the landscape against which he was pictured was an unforgiving, endless one."

Could Sadashiv Rao Bhau be depicted like this in his final moments in the afternoon of January 14 1761: endowing a sense of tragedy to the lone figure, and by picturing him against the landscape that was an unforgiving, endless one?