“Constitutional morality is not a natural sentiment. It has to be cultivated. We must realise that our people have yet to learn it. Democracy in India is only top dressing on an Indian soil, which is essentially undemocratic”

The month of Chaitra (चैत्र) of the Saka-era (शक संवत) 1937, marking the end of the winter and the start of the spring, began on March 21 2015. Chaitra in Maharashtra is known for women's gatherings (हळदीकुंकू).

My wife has never called such a gathering but my mother always called one at Miraj (मिरज) and it used to be a festive occasion. Until my sister grew up, I used to go around door to door and extend the invitations for the same with some enthusiasm.

We used to create an arrangement with the goddess at the center surrounded by all kinds of decorations (आरास) - fruits, figurines, sweetmeats, oil-lamps (समया)....The goddess always looked stunning.

The women and kids- men not invited- who came were served a roughly crushed mix of Bengal gram and raw mango (आंब्याची डाळ) and a cardamom-saffron scented sweet-sour drink of boiled raw mango (पन्ह).

Most of the invited women used to be Brahmins but there also were a few non-Brahmin from our immediate neighborhood.

I think the tradition of holding such events 'Haldi-Kunku' (हळदी-कुंकू) goes back a long way.

Of course. there was hardly an aspect of Indian life not affected by segregation and discrimination. I did not know even Haldi-Kunku was not spared.

Even when the invitees were only Brahmins, there used to be deep discrimination.

Ladies, all Brahmins,  from the rich households were applied saffron on their hands, those from the (upper) middle-class were applied 'ashtagandha' (a mixture of eight fragrant herbs) on their hands and the rest were not applied anything at all! (All married women, regardless of their class, were applied vermillion and turmeric on their foreheads.)

This used to happen even in early decades of 20th century.

Inspired by Ms. Kashibai Kanitkar, some time during 1919-1924, Mrs. Sakhutai Abhyankar (सखुताई अभ्यंकर) supposedly rebelled against such a practice and held a 'classless' Haldikunku,  which some three hundred women attended and the wife of Mr. N C Kelkar (न चि केळकर) presided. Unfortunately, Mrs. Kanitkar could not be present because she was away at Banaras (Varanasi).

All this was narrated to the author (Ms. Vaidya) by Mrs. Abhyankar.

Was there an aspect of Indian life that had  no segregation or discrimination? Is it there now? Have old prejudices now been replaced by new? 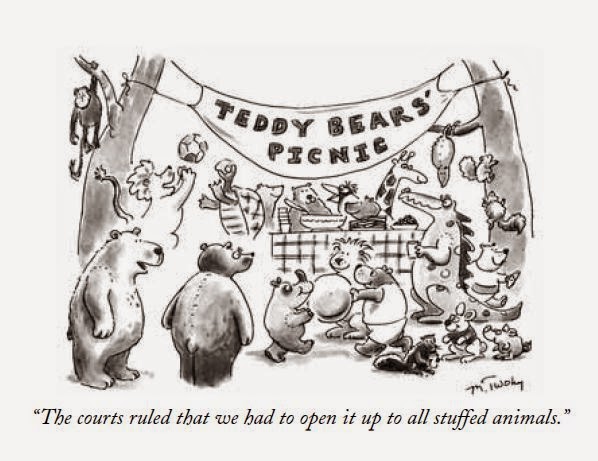 My caption: "The courts ruled that we had to apply saffron or ashtagandha to all or nothing at all."
Posted by Aniruddha G. Kulkarni at 9:00 AM No comments:

Greece as Sisyphus...What is Merope Up to?

Albert Camus, The Myth of Sisyphus, 1942:
"The struggle itself toward the heights is enough to fill a man's heart. One must imagine Sisyphus happy."

Yannis Dragasakis, Greek Deputy Prime Minister & Yanis Varoufakis, Greek Finance Minister & Euclid Tsakalotos, deputy minister for international economic relations  in FT, UK,  March 18 2015:
"The country is in a position like that of Sisyphus — a man condemned to roll a boulder to the top of a hill, only to see it roll down again...We risk condemning an entire generation to a future without hope. To avoid that, what we ask from our euro-zone partners is to treat Greece as an equal and help us escape from this Sisyphean trap."

As a punishment for for chronic deceitfulness, King Sisyphus is made to roll a huge boulder up a steep hill. Before he can reach the top, however, the massive stone always rolls back down, forcing him to begin again.

Sisyphus is married to Atlas’s daughter Merope. It is said that Merope is the faintest of the stars because she is the only of the Pleiades to have married a mortal.

After reading Greek ministers' comments above, the following cartoon looked even funnier... Merope, the wife,  is blocking the progress of Sisyphus!

Is the rest of EU behaving like Merope for Greece? 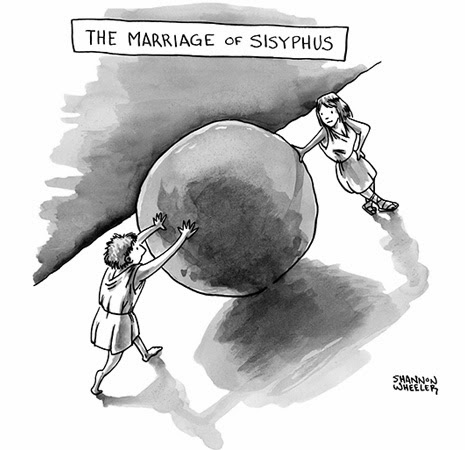 "...At the end of my first week in-country I met an information officer in the headquarters of the 25th Division at Cu Chi who showed me on his map and then from his chopper what they’d done to the Ho Bo Woods, the vanished Ho Bo Woods, taken off by giant Rome plows and chemicals and long, slow fire, wasting hundreds of acres of cultivated plantation and wild forest alike, “denying the enemy valuable resources and cover.”..."

Almost fifty years ago, on March 8 1965, first American ground troops arrived in Vietnam. By the time they left at the end of 1973, an estimated 3 million Vietnamese were killed, including 2 million civilians. Hundreds of thousands were seriously injured and disabled.

However, they were even more devastating for Vietnamese plant life.

"...Although the Romans used to destroy their enemies’ fields, and armies have always bombed and burned adversaries out of their hiding places, there is no real precedent for the systematic use of science and technology to destroy large portions of a country’s natural environment, as the United States did with its herbicide-spraying program in Vietnam. The overall operation was called Trail Dust, but it’s generally referred to as Ranch Hand. Another name that was sometimes used was Hades, and that may be the most apposite of the three...

...Agent Orange accounted for more than 60 percent of the spraying, but actually it was just one in a rainbow spectrum of herbicides, each employing a different cocktail of chemicals and color-coded by a painted band around its fifty-five-gallon storage barrel. Agent White was the second most widely used defoliant, while substantial amounts of Agent Blue were also sprayed, mainly to kill crops by desiccation. Agents Pink, Green and Purple were used in smaller quantities during the early years of the war..." 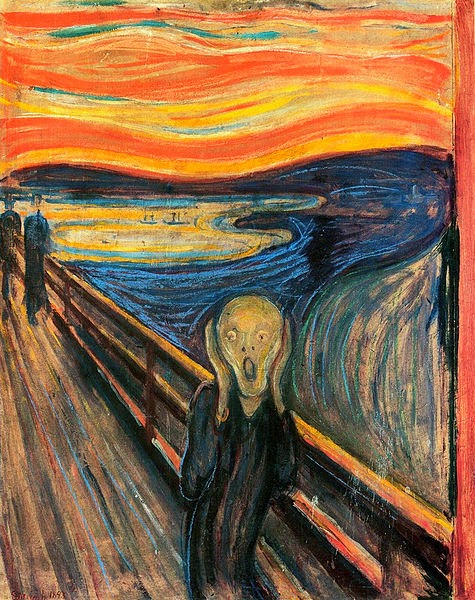 Are all Agents captured in Munch's picture? 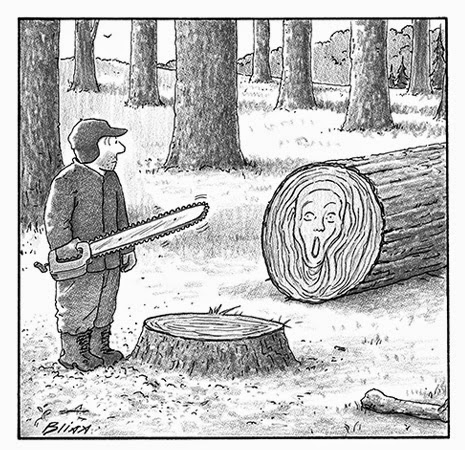 Artist: Harry Bliss, The New Yorker, April 2014
Posted by Aniruddha G. Kulkarni at 9:00 AM No comments:

No Indian media informed me that Yoshihiro Tatsumi died on March 7 2015. He created a dark, noirish style of Japanese manga he called gekiga, meaning “dramatic pictures".

Apparently the term gekiga (劇画)- dramatic pictures- was coined by Mr. Tatsumi because he did not like the term manga (漫画), whimsical pictures.

Even in Marathi (मराठी)  there is no agreement on what cartoons should be called: हास्यचित्रे का व्यंगचित्रे? And there are Americans who started calling erstwhile comic books as graphic novels.

I feel very shy  including Marathi in this discussion because Marathi does not hold a candle to the vast graphic literature that exists in Japanese and English.

I remember, on my first visit to Japan in the 1990's, I was overwhelmed by the huge stacks of manga books in even the smallest of the kiosks in and around Tokyo. I bought one adult manga book. I was not sure if Indian customs would allow it. They never bothered with my baggage. 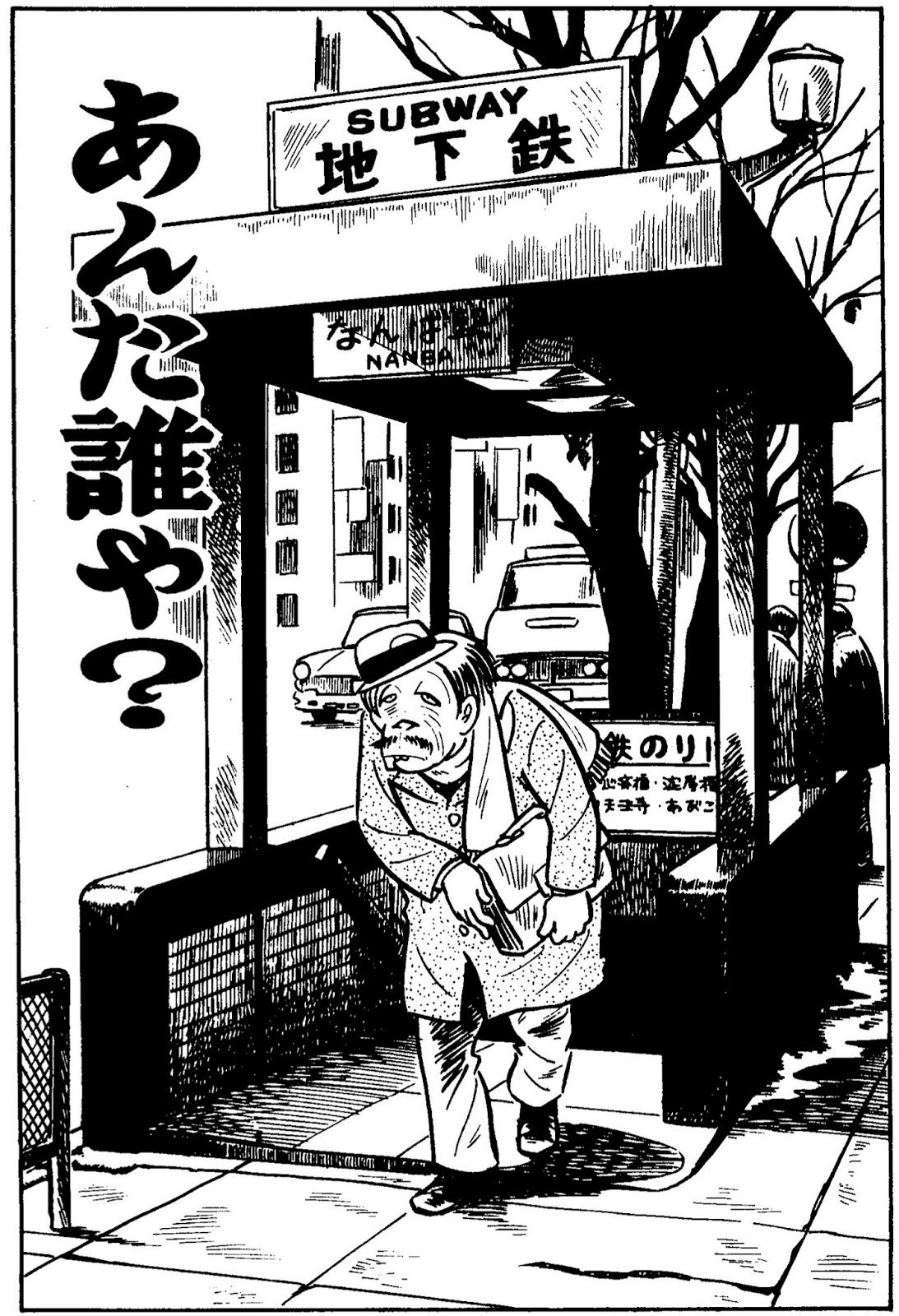 The title page of “Unpaid.”

Imagine if we had the tradition of gekiga/manga in India, what possibilities would have opened up to describe the life in Mumbai?

One the greatest chroniclers of Mumbai, Bhau Padhye (भाऊ पाध्ये) would be a gekiga artist! Or was he already a  manga artist? 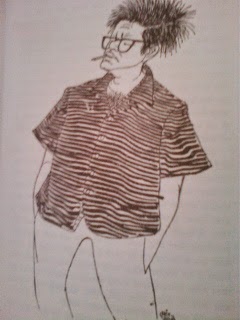 
In this caricature, Sarwate seems to have drawn Bhau as 'whimsical picture' 漫画!
Posted by Aniruddha G. Kulkarni at 9:00 AM No comments:

Can Germany REGIFT and Not REBUFF Greek Trojan Horse?

A headline in FT in the month of February 2015: 'Germans rebuff Greek 'Trojan horse':

"Athens' chances of finding itself without an EU financial backstop in one week will come down to a bitter face-off in Brussels today between the Greek and German finance ministers, after Berlin rejected Greece's request to extend its €172bn rescue by six months.
The German rebuff came just hours after Yanis Varoufakis, the Greek finance minister, reversed his government's long-held promise to kill the current bailout in a letter to his fellow ministers. But the letter, obtained by the Financial Times , had clauses that Berlin told counterparts amounted to "a Trojan horse" designed by Athens to change the conditions it must meet to receive €7.2bn in aid available for finishing the bailout."

Is rebuffing the only option? How about regifting? 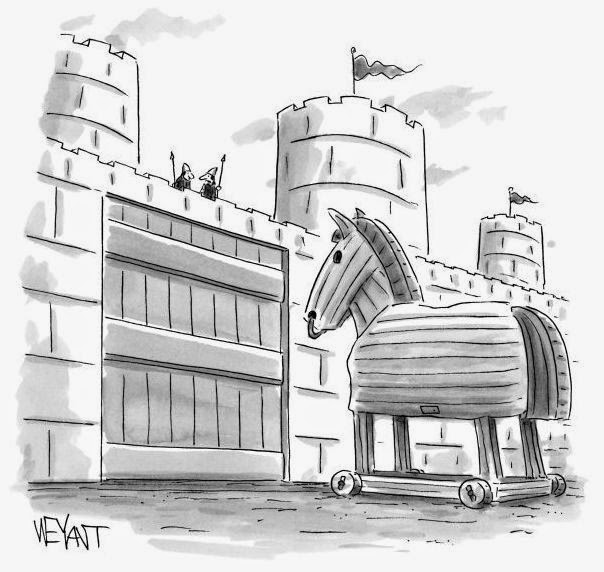 “We could always regift it.”

Here is another one: 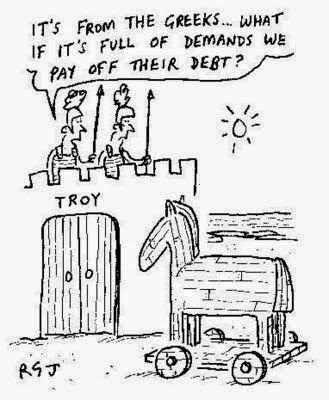 Can You Juggle a Household, Three Kids, and a Career? 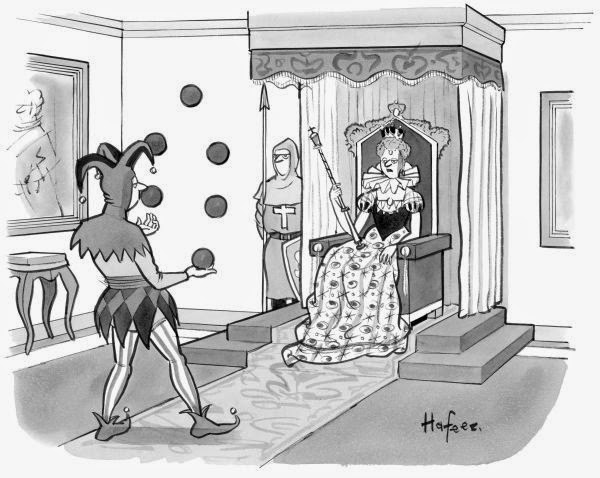 “Can you juggle a household, three kids, and a career?”

Artist: Kaamran Hafeez, The New Yorker, January 2015
Posted by Aniruddha G. Kulkarni at 9:00 AM No comments:

Punishment for Not Flossing 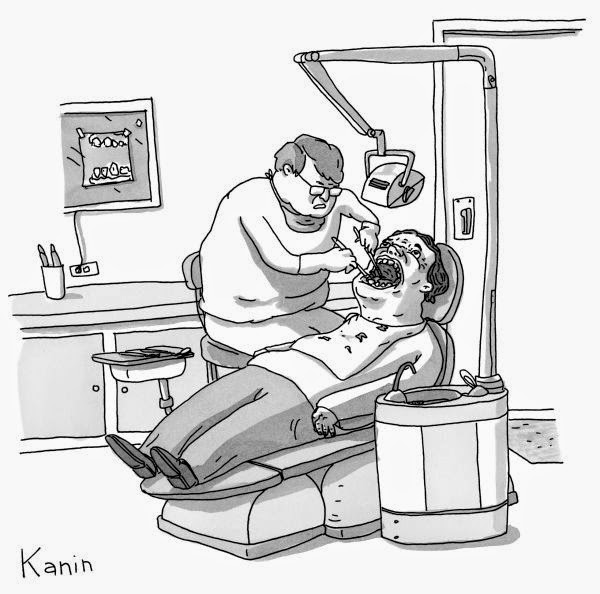 “I’m not actually doing anything—this is just punishment for not flossing.”


Artist: Zachary Kanin, The New Yorker, October 2014
Posted by Aniruddha G. Kulkarni at 9:00 AM No comments:

Today, March 3 2015, my son Jaydutt turns 21...a big day for him, perhaps but certainly for his mother Anju and me...We encouraged him to read / watch/ listen to lots of classics, we never taught him many so-called morals and tried to show him two sides of most problems...as for profanity, he could not help listening to it because of his father...I was brought up in Miraj where a tail was never just a fucking tail!

I must have read Panchatantra in Marathi dozes of times during my childhood. Even today I remember every story.

I started thumbing through it and came across one of my favorite stories:  'The Wedge-Pulling Monkey', in Marathi 'पाचर उपटणारे माकड'.


The story has this:"...There the monkeys began their playful frolics upon tree-top, lofty roof, and woodpile. Then one of them, whose doom was near, thoughtlessly bestrode the log, thinking: "Who stuck a wedge in this queer place?" So he seized it with both hands and started  to work it loose. Now what happened when the wedge gave at the spot where his private parts entered the cleft, that, sir, you know without being told..."

(from the translation dated 1925 by Arthur W. Ryder)

Now I remembered clearly that the Marathi translation we had stated that the monkey's tail- not penis- was caught in the cleft.

Therefore, I looked up the same story in Bhave's book. It stated: 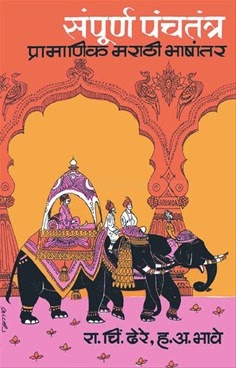