Where is the Elephant's Version of George Orwell's "Shooting an Elephant"?

should the truth about the world exist, it’s bound to be nonhuman.

Scientists searching for extra-terrestrial life ponder anxiously whether mankind is alone in the universe. They would be better occupied trying to communicate with the dwindling numbers of their animal kin.

“the rational quest of what is useful to us teaches us the necessity of associating ourselves with our fellow men, but not with beasts, or things, whose nature is different from our own.”

"It’s a common belief that we have some moral progress, some social progress, some political progress. But looking at the twentieth century it seems that it was the cruelest century of them all. It’s unbelievable what people did to other people and what we still do to animals. We’ve actually built concentration camps for cows and chickens who live only to be killed and it structures their entire lives."

"It’s seems to me that there’s no better example of why corporate interests and economic logic need to be balanced with laws and restrictions on corporate behavior than the fact not only that so many animals are killed, but that they are made to live lives where none of their instincts get to be acted out, where every waking moment of their lives is suffering and torture, all so that meat can be produced for fifty cents less per pound. To me it’s a monstrosity."

A lot has been written and shown about the incident.

A common theme to emerge: crowds aggravated things...The police, which had a tough time controlling the crowd, resorted to a lathi-charge to keep the crowd at bay... The elephants would have been caught faster but for the crowd frenzy and the delay in procuring tranqulisers...

A similar incident happened some time during 1922-1927 in Moulmein, in lower Burma about which George Orwell- who was posted as Assistant Superintendent in the British Imperial Police- has written a famous essay: “Shooting an Elephant”.

“…That is invariably the case in the East; a story always sounds clear enough at a distance, but the nearer you get to the scene of events the vaguer it becomes…

...But at that moment I glanced round at the crowd that had followed me. It was an immense crowd, two thousand at the least and growing every minute. It blocked the road for a long distance on either side. I looked at the sea of yellow faces above the garish clothes-faces all happy and excited over this bit of fun, all certain that the elephant was going to be shot. They were watching me as they would watch a conjurer about to perform a trick. They did not like me, but with the magical rifle in my hands I was momentarily worth watching. And suddenly I realized that I should have to shoot the elephant after all. The people expected it of me and I had got to do it; I could feel their two thousand wills pressing me forward, irresistibly. And it was at this moment, as I stood there with the rifle in my hands, that I first grasped the hollowness, the futility of the white man's dominion in the East. Here was I, the white man with his gun, standing in front of the unarmed native crowd – seemingly the leading actor of the piece; but in reality I was only an absurd puppet pushed to and fro by the will of those yellow faces behind. I perceived in this moment that when the white man turns tyrant it is his own freedom that he destroys. He becomes a sort of hollow, posing dummy, the conventionalized figure of a sahib. For it is the condition of his rule that he shall spend his life in trying to impress the "natives," and so in every crisis he has got to do what the "natives" expect of him. He wears a mask, and his face grows to fit it. I had got to shoot the elephant. I had committed myself to doing it when I sent for the rifle. A sahib has got to act like a sahib; he has got to appear resolute, to know his own mind and do definite things. To come all that way, rifle in hand, with two thousand people marching at my heels, and then to trail feebly away, having done nothing – no, that was impossible. The crowd would laugh at me. And my whole life, every white man's life in the East, was one long struggle not to be laughed at…”

And then he goes on to shoot the elephant.

"When I pulled the trigger I did not hear the bang or feel the kick – one never does when a shot goes home – but I heard the devilish roar of glee that went up from the crowd. In that instant, in too short a time, one would have thought, even for the bullet to get there, a mysterious, terrible change had come over the elephant. He neither stirred nor fell, but every line of his body had altered. He looked suddenly stricken, shrunken, immensely old, as though the frightful impact of the bullet had paralysed him without knocking him down. At last, after what seemed a long time – it might have been five seconds, I dare say – he sagged flabbily to his knees. His mouth slobbered. An enormous senility seemed to have settled upon him. One could have imagined him thousands of years old. I fired again into the same spot. At the second shot he did not collapse but climbed with desperate slowness to his feet and stood weakly upright, with legs sagging and head drooping. I fired a third time. That was the shot that did for him. You could see the agony of it jolt his whole body and knock the last remnant of strength from his legs. But in falling he seemed for a moment to rise, for as his hind legs collapsed beneath him he seemed to tower upward like a huge rock toppling, his trunk reaching skyward like a tree. He trumpeted, for the first and only time. And then down he came, his belly towards me, with a crash that seemed to shake the ground even where I lay." 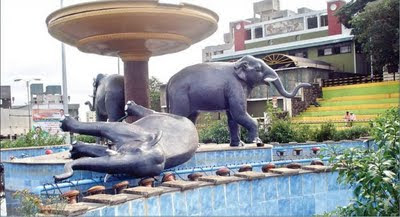 There are doubts whether Orwell himself actually shot the elephant.

Luckily no one was shot in Mysore. But how terrorised those two elephants must have felt as crowds chased them, honking, pelting stones?

I have seen that terrorised state in the eyes of stray dogs, unsure run of chameleons, pigs running for their lives as their owners chase them to grab them to send them on one last trip, and the movement of the snake- I had to kill in our apartment- as it tried to escape, a couple of years ago. Read a related post here.

Orwell's essay is the pride of English language but I have a question: Eightyfive years later, where is the elephant's version of it?

B.C. by Artist: Johnny Hart "Seeing the world from a dog's point of view"
Posted by Aniruddha G. Kulkarni at 9:00 AM No comments: Links to this post