n plus one mag:
“For David Hume, increased conversation between men and women corresponded to “an increase of humanity, from the very habit of conversing together.” But Hume didn’t know about Gchat, which offers us so many opportunities for conversation that conversation becomes impossible. We are distracted from chatting by chatting itself.”

John Harris:
“ In the book, (Nicholas) Carr looks back on such human inventions as the map, the clock and the typewriter, and how much they influenced our essential modes of thought (among the people whose writing was changed by the latter were Friedrich Nietszche and TS Eliot). By the same token, he argues that the internet's "cacophony of stimuli" and "crazy quilt" of information have given rise to "cursory reading, hurried and distracted thinking, and superficial learning" – in contrast to the age of the book, when intelligent humans were encouraged to be contemplative and imaginative...”


“...“This was what was keeping me awake at night,” Walter said. “This fragmentation. Because it’s the same problem everywhere. It’s like the internet, or cable TV—there’s never any center, there’s no communal agreement, there’s just a trillion little bits of distracting noise. We can never sit down and have any kind of sustained conversation, it’s all just cheap trash and shitty development. All the real things, the authentic things, the honest things are dying off. Intellectually and culturally, we just bounce around like random billiard balls, reacting to the latest random stimuli.”...”

Vasant Sarwate (वसंत सरवटे) has poked an occasional fun at some great art. An example could be found here: The Persistence of Memory. Vasant Sarwate style!

Here is a similar effort that made me laugh and introspect. 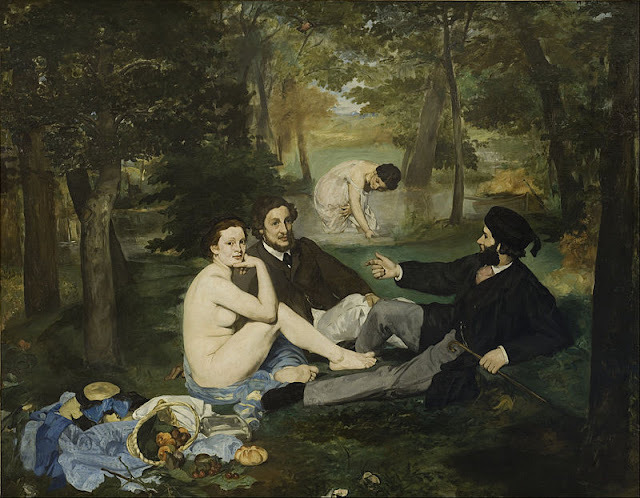 Wikipedia says about Manet's masterpiece:
"The painting features a nude woman casually lunching with two fully dressed men. Her body is starkly lit and she stares directly at the viewer. The two men, dressed as young dandies, seem to be engaged in conversation, ignoring the woman. In front of them, the woman's clothes, a basket of fruit, and a round loaf of bread are displayed, as in a still life. In the background a lightly clad woman bathes in a stream. Too large in comparison with the figures in the foreground, she seems to float above them. The roughly painted background lacks depth – giving the viewer the impression that the scene is not taking place outdoors, but in a studio..." 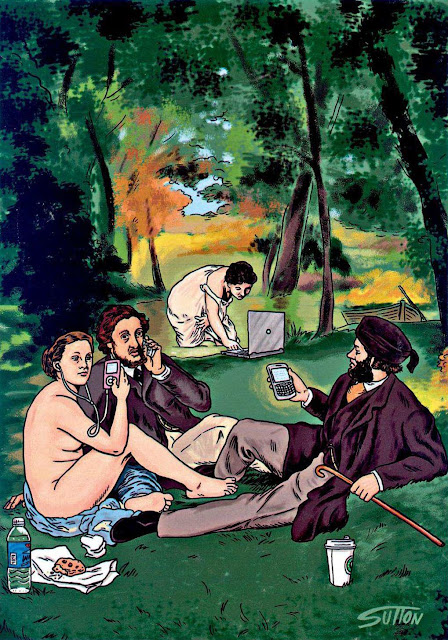 The two men, dressed as young dandies, and the nude woman are all ignoring each other...In the background a lightly clad woman is NOT bathing in a stream but perhaps busy is live streaming  something....the scene is probably not taking place outdoors...and if it is, one of the persons is certainly trying to catch Pokemons...
Posted by Aniruddha G. Kulkarni at 9:00 AM No comments: