Americans, you peel Indian mangoes ONLY yourself for sheer pleasure and not because some stupid manual tells you so

Indian mangoes seem to be now available in US. First, exports to middle-eastern countries made them expensive for people like me. Now, it is US’s turn.

However, I don’t mind. I have had a shot at the best of mangoes for a long time because I was born and raised in western Maharashtra-truly a mango country.

For us, lunches in summer were subservient to mango. Every thing else on the plate was distant second. We ate almost six chapattis daily for a lunch, a number that would dwindle to two or three once mangoes departed for the year. Mango aroma (particularly of Payari and Hapus, characterized for their juice and meat respectively) filled the air of April, May and part of June. By the way- mangoes never left us fully because our parents would cook a mango jam (known in Marathi as Muramba or Sakharamba) with the last crop of Hapus (Alphonso) that hit the market every year.

Americans are obsessed with sex. Now, they have some thing equally sensuous to fuss about. This summer I see pictures of white Americans, wearing jackets, sitting at the table with knife and fork to eat Indian mangoes. I feel they need some training eating mangoes. Kamasutra of eating mangoes.

Here is the Chapter I:

“Eat them with your bare hands. First feel them up. Then smell them for a while. Now peel them slowly, eat portion sticking to its skin. Remove the entire skin continuing this process.
Now feel the naked fruit in your hand. You are ready to eat it. Tuck into it until you reach the seed. Lick the seed until no meat is left there. If your mango is indeed the original Hapus, the licked seed should leave no fiber on its shell or in your mouth.
Clean your bloodied hands but not with strong soap. A true mango should leave behind its aroma long after hands are washed.” 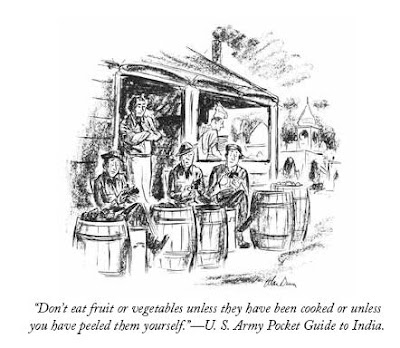 Artist: Alan Dunn The New Yorker 31 July 1943
Posted by Aniruddha G. Kulkarni at 11:38 AM No comments: Links to this post