When I googled Taimes of India’s website for word “sex” “appearing in headline” for “within past 30 days”, it threw up three pages of results.

One imporatnt search result: Governments of Madhya Pradesh, Gujarat and Maharashtra have banned sex education in school. The sex education classes were part of the adolescence education programme for Class IX and above, aimed at creating AIDS awareness among students.

Chief minister of Madhya Pradesh said: "...... Children should be taught yoga and Indian culture and tradition instead of sex education.” (March 20).

A Maharashtra law maker said: "The message reaching younger generation will be different from what the government aimed at. Instead of having a healthy attitude towards sex, the images currently used actually harm young and impressionable minds. These books are so bad and lacking in sensitivity that they will destroy Indian culture." (March 30)

There is another important news item dated April 4 2007: “US 5th-graders arrested for having sex in class- Five fifth-grade students face criminal charges after authorities said four of them had sex in front of other students in an unsupervised classroom and kept a classmate posted as a lookout for teachers.”

Posted by Aniruddha G. Kulkarni at 4:17 PM No comments:

Temples of modern India or disease of giganticism

Ramachandra Guha in his essay “Prime Ministers and big dams” for Hindu on December 18, 2005 says:

“SPEAKING to the Central Board of Irrigation and Power in November 1958, Jawarhalal Nehru deplored a "dangerous outlook developing in India", which he termed the "disease of giganticism". The "idea of doing big undertakings or doing big tasks for the sake of showing that we can do big things," remarked Nehru, "is not a good outlook at all". For it was "the small irrigation projects, the small industries and the small plants for electric power which will change the face of the country, far more than a dozen big projects in half a dozen places". The Prime Minister drew his audience's attention to "the national upsets, upsets of the people moving out and their rehabilitation and many other things, associated with a big project". These upheavals would be on a lesser scale in a smaller scheme, enabling the State to "get a good deal of what is called public co-operation……..For this was the same Nehru who was an enthusiast for large projects, who once celebrated big dams as the "temples" of modern India.”

I see no problem here.

Great leaders are like great books. And to follow them, we do Ned Flanders (the Simpsons Character) when he says: “ I've done everything the Bible says - even the stuff that contradicts the other stuff!” 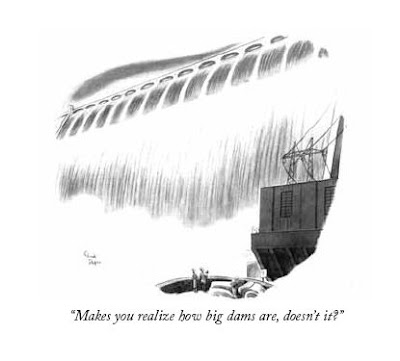 Posted by Aniruddha G. Kulkarni at 4:11 PM No comments: