“IT’S the rainy season in Myanmar. It’s also cholera season. When Cyclone Nargis arrived two weeks ago, the waters it unleashed destroyed houses and killed people and livestock. The storm also devastated other things that haven’t made the headlines, but that can mean the difference between life and death: toilets. Even before the cyclone, 75 percent of Burmese had no latrines. Like some 2.6 billion other people worldwide, they do their business by roadsides, on train tracks or wherever they can. But the few latrines that did exist in the Irrawaddy Delta are now flooded or flattened, and their contents have seeped into already filthy waters.

So what? There are other priorities, aren’t there? Food, shelter and clean water are what aid agencies emphasize. But human excrement is a weapon of mass destruction. A gram of human feces can contain up to 10 million viruses. At least 50 communicable diseases — including cholera, meningitis and typhoid — travel from host to host-in human excrement. It doesn’t take much: a small child, maybe, who plays in soil where people have been defecating, then dips his fingers in the family rice pot. The aftermath of a disaster like Cyclone Nargis — with masses of weakened people on the move — is a communicable disease paradise…”

This blog already has a post on the status of sanitation in urban India of 21st century. See it here. What chance did then a brutal battle location almost 248 years ago have?

For a period of 2.5 months in late 1760 to January 14, 1761, Maratha army camp- approximate 200,000 people strong- was forced to stay put in an area of about 15 miles long near Panipat. It could never change its location even once unlike their enemy army of Ahmad Shah Abdali that changed its own location 3 times.

Unfortunately today there are few letters available that were sent from the Maratha army camp during this period because most of the sent ones were captured and destroyed by the enemy.

“…In our sanitary, plumbed lives, the toilet — an engineering marvel — removes waste out of sight and out of mind. As Steven Pinker recently wrote in “The Stuff of Thought,” the vocabulary of excretion has sneaked in and taken the taboo place previously held by religious words, and this switch parallels the rise of sewers and the sanitizing of excrement. A substance common to us all, and as vital to life as breathing, has become unspeakable, and particularly in the polite and powerful circles that could do something about its deadly effects…

…This year, the International Year of Sanitation, is a fine time to address a pointless and damaging conversational taboo. Solving sanitation is about more than semantics. But our refusal to talk about it says something about us, and none of it good.”

Not every one refuses to talk about human excrement though.

(At the tip of the hand resides Laxmi, At the root Sarasvati,
At the centre Govinda, in the morning sight hand.)

Not too long ago in India, during early years of my childhood, human soil was carried manually in carts. If Americans (and during Nixon administration it was entirely plausible) came looking for WMDs in India then news ticker in the picture below could read… 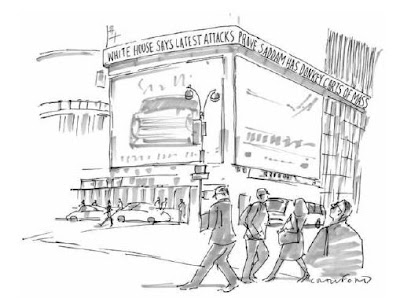 Artist: Michael Crawford The New Yorker 8 December 2003
Posted by Aniruddha G. Kulkarni at 10:00 AM 1 comment: Links to this post