"Tiger treated cricket as something which was to be enjoyed. That's why he was so flambouyant and had the charisma...My idol (Burki) would tell me if Mansoor Ali Khan had not lost vision in one eye, he would have broken all the records. The quality of strokes he could play with one eye, mere mortals cannot play..."

"Tiger, without doubt, was the most striking figure in his time in Indian cricket. Also, he was one who thought far ahead of his times. And I learnt a lot that is valuable about men and matters from him, for which I shall always be grateful."

“……It said a great deal for Smith that he did not allow the misfortune to throw him off balance. Bowling more carefully, he delivered the rest of the over to the order. Five balls went down, each of them swinging into the batsman. Three of them Troughton was able to leave alone, as they swung across his body and down the leg side, making Deacon leap and stretch to stop them from going for byes. True, Troughton played carefully, once going right up on his toes to bring the ball down on to the pitch in front of him with the straightest of the bats, dropping his wrists and slackening the fingers round the bat handle. The seventh, aimed straight at the middle stump had Troughton driving across the line trying to work it away to mid-wicket. It moved off the pitch again, but this time in the other direction, touching the outside edge of the bat as it went and winging its way chest high to Gauvinier at first slip- a straightforward, finger-tingling slip catch. He flung the ball high in delight- for himself, for Norman, for the ball, for the catch, for the score and for the sheer joy of cricket”

(“The Village Cricket Match”, 1977 from cricket anthology “The Joy of Cricket” Selected and Edited by John Bright-Holmes)

Before that India, led by Pataudi, had lost the Nagpur test match to New Zealand in October 1969. Chasing 277, India were bundled out in 109 in fourth innings.

It was a national calamity. There were rumours that our cricketers were too drunk to walk on cricket field on the last day of the match October 8. Another rumour was that Nawab of Pataudi jnr, India's captain, was too busy wooing Sharmila Tagore to concentrate on cricket. (He made 7 and 28 in the match.)

We angry kids sang a spoof of the 'Aradhana' song mentioned above making fun of his damaged eye. It was cruel.

It must have been lowest point in his cricketing career.

I did not read anything positive on Pataudi in Marathi press for a long time after that.

But he would bounce back soon. India beat strong Australian team in Delhi in Nov- December 1969. I still remember the day. I also remember the bulletin board at Miraj High School next day which displayed cuttings from many newspapers celebrating Indian victory. Pictures of G R Viswanath and Ajit Wadekar, two not-out batsmen at the crease, were prominent among them.

My joy knew no bounds.

Thanks to the decisive vote of the chairman of selection committee the late Vijay Merchant, Ajit Wadekar was chosen as the captain of legendary Indian cricket team that toured West Indies, England in 1971 and beat them both.

Pataudi had pulled out of the tours saying:

"...If I had made more runs against Australia I could not have been touched. But I like Ajit, the new captain, he is a good lad and I wish him all the luck. He is a fine player too. I cannot go to the West Indies, even if I am asked to, because I am not in the good form. I do not want to be a liability to the team and to the new captain. My presence will put a strain on him."

There was no bitterness in Pataudi, not just about Wadekar, but also Merchant:

"No, I cannot think he had any motive when he voted against me. He must have been convinced that as a batsman I was not pulling my weight in the side and that is good enough to drop any player. It does not matter whether the player is the captain."

Indian government abolished privy purses, a payment made to the royal families of erstwhile princely states of British India, in 1971. Pataudi was thrashed in the Lok Sabha elections of 1971 when he contested it to protest the abolition.

Pataudi always played aggressive brand of cricket. His bowlers always bowled to get wickets. B S Bedi, E A S Prasanna often flighted deliveries- such a rare sight these days- inviting the best of the breed to try their luck driving them.

For him, cricket, until he stopped playing, was never commerce. (He of course made good money on cricket, including IPL, after he retired.)

Last time I saw him was on TV while giving away 'Pataudi Trophy 2011' to the English team on Aug 22 2011. He and his trophy were initially ignored by the English team. Sunil Gavaskar was almost in tears describing it. I wonder how Pataudi felt about it.

In all probability he was not as worked up as Mr. Gavaskar! Remember, he was original Mr. Cool.

"...His tactics to turn a lost cause around were on display at the Eden Gardens in Kolkata in 1974-75 when he connived with the spinners to beat Clive Lloyd’s mighty West Indies after being two down in the series.

Apart from Vishy’s brilliant 139 the match is known for the spells of Bishen Bedi and B.S. Chandrashekhar who put batsmen of the calibre of Roy Fredricks, Gordon Greenidge, Alvin Kallicharan, Vivian Richards and Lloyd on the back foot. While Bedi and Chandra were among the wickets, Tiger’s main weapon was Erapalli Prasanna who went wicketless bowling 25 overs for a measly 42 runs and put tremendous pressure on the world’s most attacking batsmen.

I was privileged to be present in Vishy’s hotel room immediately after the team had returned victorious with half a day to spare. Tiger walked in with his customary nonchalance, congratulated Vishy and declared Prasanna as the Man of the Match.

Having said that, he asked the players present in the room if they “wanted to go to the races”..."

I bet had we lost the match, Pataudi would have still asked "if they wanted to go to the races".

Life for him was much, much larger than cricket. 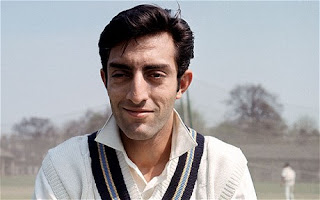 courtesy: Photo: S&G and Barratts/EMPICS Sport
Posted by Aniruddha G. Kulkarni at 10:37 AM No comments: