“When there is chaos, Wall Street makes more money.”

Mohammad Alipour-Jeddi, the head of market analysis for OPEC, and William F. Galvin, the secretary of state in Massachusetts, have blamed speculators for rising prices. “There is enough crude in the markets,” Mr. Alipour-Jeddi said Monday. Bottlenecks in refining and “speculative activities” are forcing prices higher, he said.
”
Conspiracy theorists have long been saying that oil prices are being manipulated to hurt prospects of emerging economies like China and India.
Gordon Gekko’s of oil trading have emerged. Sunday Times, London reports:

” THREE science graduates with a combined fortune of more than £500m have emerged as the commodity traders who led the “oil rush” that has pushed petrol prices to more than £1 a litre.

David Harding, Michael Adam and Martin Lueck are renowned in the City for their skills in targeting the most lucrative trades in commodities, including oil.

Their system - known as the “black box” and based on mathematical algorithms - is now deployed by three of the biggest hedge funds in London and has helped push oil prices towards $100 a barrel.

The three funds, AHL, Aspect Capital UK and Winton Capital Management, control more than £15 billion of funds used to buy future oil contracts and other commodities, usually on the gamble that prices will rise…” 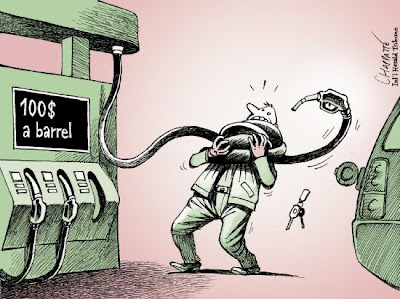