"....The world was upside down. What was he, a Master of the Universe, doing down here on the floor, reduced to ransacking his brain for white lies to circumvent the sweet logic of his wife? The Masters of the Universe were a set of lurid, rapacious plastic dolls that his otherwise perfect daughter liked to play with. They looked like Norse gods who lifted weights, and they had names such as Dracon, Ahor, Mangelred, and Blutong. They were unusually vulgar, even for plastic toys. Yet one fine day, in a fit of euphoria, after he had picked up the telephone and taken an order for zero-coupon bonds that had brought him a $50,000 commission, just like that, this very phrase had bubbled up into his brain. On Wall Street he and a few others—how many?—three hundred, four hundred, five hundred?—had become precisely that…Masters of the Universe. There was…no limit whatsoever! Naturally he had never so much as whispered this phrase to a living soul. He was no fool. Yet he couldn’t get it out of his head. And here was the Master of the Universe, on the floor with a dog, hog-tied by sweetness, guilt, and logic…Why couldn’t he (being a Master of the Universe) simply explain it to her? Look, Judy, I still love you and I love our daughter and I love our home and I love our life, and I don’t want to change any of it—it’s just that I, a Master of the Universe, a young man still in the season of the rising sap, deserve more from time to time, when the spirit moves me—...."

"In Democracy in America, Tocqueville (the inevitable and ubiquitous Tocqueville) saw the American sense of equality itself as disrupting the stream, which he called “time’s pattern”: “Not only does democracy make each man forget his ancestors, it hides his descendants from him, and divides him from his contemporaries; it continually turns him back into himself, and threatens, at last, to enclose him entirely in the solitude of his own heart.” A grim prospect to the good Alexis de T.—but what did he know about . . . Let’s talk about Me!
Tocqueville’s idea of modern man lost “in the solitude of his own heart” has been brought forward into our time in such terminology as alienation (Marx), anomie (Durkheim), the mass man (Ortega y Gasset), and the lonely crowd (Riesman). The picture is always of a creature uprooted by industrialism, packed together in cities with people he doesn’t know, helpless against massive economic and political shifts—in short, a creature like Charlie Chaplin in Modern Times, a helpless, bewildered, and dispirited slave to the machinery. This victim of modern times has always been a most appealing figure to intellectuals, artists, and architects. The poor devil so obviously needs us to be his Engineers of the Soul, to use a term popular in the Soviet Union in the 1920s. We will pygmalionize this sad lump of clay into a homo novus, a New Man, with a new philosophy, a new aesthetics, not to mention new Bauhaus housing and furniture.

But once the dreary little bastards started getting money in the 1940s, they did an astonishing thing—they took their money and ran. They did something only aristocrats (and intellectuals and artists) were supposed to do—they discovered and started doting on Me! They’ve created the greatest age of individualism in American history! All rules are broken! The prophets are out of business! Where the Third Great Awakening will lead—who can presume to say? One only knows that the great religious waves have a momentum all their own. Neither arguments nor policies nor acts of the legislature have been any match for them in the past. And this one has the mightiest, holiest roll of all, the beat that goes . . . Me . . . Me . . . . Me . . . Me . . ."

अमेरिकन लोकशाही
"“I have never wanted to cover politics, except in Caribbean countries. The United States is so stable that political victories consist of minor variations. Our government is like a train on a track, and there are people on the right-hand side and on the left screaming at the train. But the train has no choice: it’s on a track! It just keeps going. And it’s really quite marvellous how stable that situation is. You can’t suddenly have parliament deciding there has to be an election.


And when the most unbelievable things happen, there’s no backlash. For example, when Richard Nixon was forced out of office, he really had no choice. Now did a junta rise up? No. Were there any demonstrations by Republicans? No. I don’t even know of anybody throwing a brick through a saloon window – [even] a drunk Republican. Everybody, like me, sat back and watched it on TV. It was an event on television...nothing really.”"

"Our government is like a train on a track, and there are people on the right-hand side and on the left screaming at the train. But the train has no choice: it’s on a track! It just keeps going. And it’s really quite marvellous how stable that situation is."... तुम्ही ठरवा आपल्या लोकशाहीचे गेल्या सत्तर वर्षात काय झालय ते... 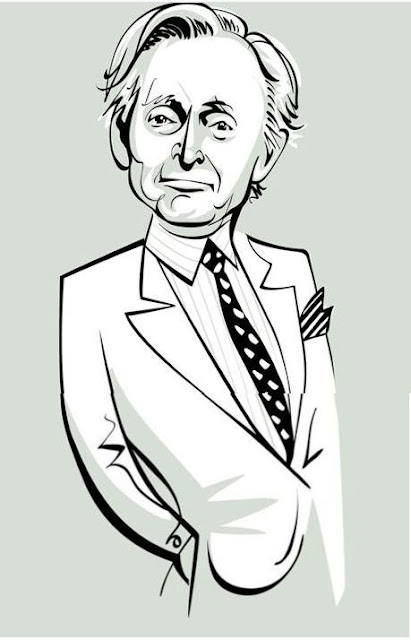 Posted by Aniruddha G. Kulkarni at 9:14 AM No comments: Links to this post