“... After two weeks of sustained bombardment, Nana Sahib offered safe passage to the British at Kanpur on 25 June, but the British men were massacred as they boarded boats onto the Ganges two days later, probably because the sepoys had become increasingly frightened about being attacked themselves. On 15 July, 200 British women and children were shot and butchered as a British army led by General Henry Havelock approached in an effort to recapture Kanpur. It was this ‘Cawnpore massacre’ that defined the horror of 1857 for generations of Britons afterwards. ‘Remember Cawnpore!’ became the cry during the war of reconquest. The massacres occurred at the lowest point of British power. With the exception of a few besieged residencies and cantonments, the East India Company’s authority had been extinguished from a vast swathe of territory between Patna in the east and Patiala in the west. Beyond that territory, British survival relied on embattled garrisons surrounded by people happy to submit to a rebel regime.


These massacres show that 1857 was far more than a political conflict for the insurgents. It was a struggle for survival. As historian Faisal Devji argues, the rebels were concerned above all to protect the distinctions that constituted Indian social life. At the core of Indians’ sense of self in the eighteenth and early nineteenth centuries was their membership of groups which distinguished them from their neighbours. These groups were defined in different ways, by caste, occupation, gender and geography. For many of the rebels, though, religion provided a common denominator, a way to articulate the sense an individual had of belonging to a particular way of life they would fight to protect. Religious belonging depended on shared practices rather than beliefs. Friendship across community divisions depended on respect for different customs. Culinary habits were particularly important. North Indian society held together because everyone respected that Brahmins refused to eat food that was not cooked by other Brahmins, Hindus refused beef and Muslims rejected pork. Forcing everyone to eat the same foodstuffs would annihilate the distinctions that each individual’s status and honour relied on, and in doing so erode the very fabric of Indian social life....


.... The great rebellion of 1857 created what historian Francis Hutchins described as ‘an illusion of permanence’, an idea that British power in India could withstand a challenge on any scale. For many Indians, it killed off the idea that this strange, aloof regime was a temporary anomaly. It forced serious thinking about how practically to cooperate, accommodate or resist it. But one of its most important effects was on the psychology of the British practitioners of empire in India. Eighteen fifty-seven was followed by new efforts to justify the exercise of British power in the Indian subcontinent, by the first serious efforts to seek legitimacy through ‘improvement’. Most of these efforts were directed at a British public, particularly British parliamentarians, who wondered whether the attention, lives and money of their compatriots should be spent governing a society that so obviously did not want British rule. But for the cadre of imperial bureaucrats themselves, many of whom came from families whose Indian careers stretched back three or four generations, 1857 removed the need for any kind of justification at all. For official families, the ‘mutiny’ was simply the most extreme moment in the continual cycle of resistance and conquest, of humiliation and then vindication, which governed Britain’s empire in India. After 1858 British power was asserted, violently and permanently, not to benefit Indians nor to pragmatically advance British interests, but to undo the dishonour of 1857’s tragic defeat.” 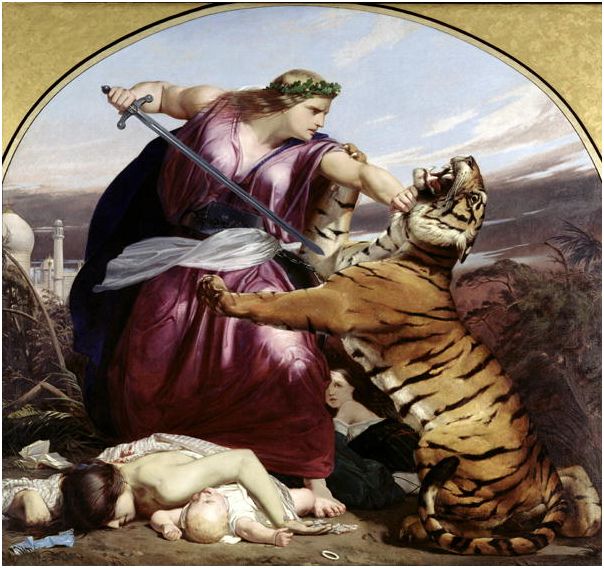 Retribution, 1858....Britannia – personified as a sword-wielding woman – slaying an insurgent tiger over the corpse of a mother and her child.