DDT- Not a Dirty Dozen but a Godsend

Today is International Environment Day. For many people, on such a day it may be inappropriate to praise DDT, which stood for Dirty Dreaded Term after Rachel Carson’s “Silent Spring”.

I was raised in Miraj, a small town in Maharashtra, and distinctly remember how our locality became almost mosquito-free when DDT was sprayed there regularly. Sight of white powder DDT spray itself was a promise of a good night's sleep and no nightly fever. When DDT’s usage was reduced, swarms of mosquitoes returned to torment us. Swat in Alan Dunn’s picture below was our only resort and that was not very effective while sleeping. Mosquitoes feasted on our bodies like a breakfast buffet.

Michael Crichton’s "State of Fear" states:
"......... I know you haven't read any of what I am about to tell you in the newspaper, because newspapers literally don't report them. I can tell you that DDT is not a carcinogen and did not cause birds to die and should never have been banned. I can tell you that the people who banned it knew that it wasn't carcinogenic and banned it anyway. I can tell you that the DDT ban has caused the deaths of tens of millions of poor people, mostly children, whose deaths are directly attributable to a callous, technologically advanced western society that promoted the new cause of environmentalism by pushing a fantasy about a pesticide, and thus irrevocably harmed the third world. Banning DDT is one of the most disgraceful episodes in the twentieth century history of America. We knew better, and we did it anyway, and we let people around the world die and didn't give a damn.".

But for some Crichton is as toxic as DDT!

For all of those, JOHN TIERNEY has written an excellent essay- “Fateful Voice of a Generation Still Drowns Out Real Science “- in NYT June5, 2007. The essay proves it’s possible to fool all the people for considerable amount of time. That’s what Carson’s book did.
Some excerpts from the article: “For Rachel Carson admirers, it has not been a silent spring. They’ve been celebrating the centennial of her birthday with paeans to her saintliness. A new generation is reading her book in school — and mostly learning the wrong lesson from it……
If students are going to read “Silent Spring” in science classes, I wish it were paired with another work from that same year, 1962, titled “Chemicals and Pests.” It was a review of “Silent Spring” in the journal Science written by I. L. Baldwin, a professor of agricultural bacteriology at the University of Wisconsin.He didn’t have Ms. Carson’s literary flair, but his science has held up much better………….
Ms. Carson used dubious statistics and anecdotes (like the improbable story of a woman who instantly developed cancer after spraying her basement with DDT) to warn of a cancer epidemic that never came to pass……..
Ms. Carson presented DDT as a dangerous human carcinogen, but Dr. Baldwin said the question was open and noted that most scientists “feel that the danger of damage is slight.” He acknowledged that pesticides were sometimes badly misused, but he also quoted an adage: “There are no harmless chemicals, only harmless use of chemicals.”……
She cited scary figures showing a recent rise in deaths from cancer, but she didn’t consider one of the chief causes: fewer people were dying at young ages from other diseases (including the malaria that persisted in the American South until DDT). When that longevity factor as well as the impact of smoking are removed, the cancer death rate was falling in the decade before “Silent Spring,” and it kept falling in the rest of the century. Why weren’t all of the new poisons killing people? An important clue emerged in the 1980s when the biochemist Bruce Ames tested thousands of chemicals and found that natural compounds were as likely to be carcinogenic as synthetic ones. Dr. Ames found that 99.99 percent of the carcinogens in our diet were natural, which doesn’t mean that we are being poisoned by the natural pesticides in spinach and lettuce. We ingest most carcinogens, natural or synthetic, in such small quantities that they don’t hurt us. Dosage matters, not whether a chemical is natural, just as Dr. Baldwin realized.
But scientists like him were no match for Ms. Carson’s rhetoric. DDT became taboo even though there wasn’t evidence that it was carcinogenic (and subsequent studies repeatedly failed to prove harm to humans). It’s often asserted that the severe restrictions on DDT and other pesticides were justified in rich countries like America simply to protect wildlife. But even that is debatable (see http://www.tierneylab.com/), and in any case, the chemophobia inspired by Ms. Carson’s book has been harmful in various ways. The obsession with eliminating minute risks from synthetic chemicals has wasted vast sums of money: environmental experts complain that the billions spent cleaning up Superfund sites would be better spent on more serious dangers.
The human costs have been horrific in the poor countries where malaria returned after DDT spraying was abandoned. Malariologists have made a little headway recently in restoring this weapon against the disease, but they’ve had to fight against Ms. Carson’s disciples who still divide the world into good and bad chemicals, with DDT in their fearsome “dirty dozen.” “ 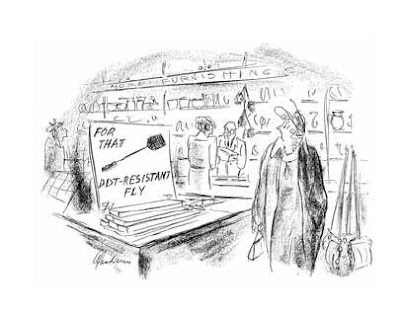 p.s. DDT is not going away. Read A New Home for DDT by DONALD ROBERTS (NYT August 20, 2007) here
Posted by Aniruddha G. Kulkarni at 6:32 PM No comments: Links to this post