The only Diwali issue of Marathi magazine I read (thumb through really) is Lalit (ललित) and that too because I subscribe to it.

Not that I am against Diwali numbers but I am too lazy to join a circulating library and I don't feel like buying any of them because I rather buy a Marathi / English book instead.

On the afternoon of November 12 2013, I  received my copy of Lalit dated November 2013 and realised that it indeed was not carrying Vasant Sarwate (वसंत सरवटे) drawn cover, for the first time after Diwali 1964.

It was just a confirmation because Sarwate himself had informed me this on November 8 2013 on phone.

I did not know that 'ललित', as an adjective in Hindi, translates as pictorial (चित्रमय). Lalit magazine indeed was 'pictorial' because it proudly carried Sarwate on its cover at least once a year.


If you wish to enjoy a few of the past covers done by Sarwate, please visit the given links. 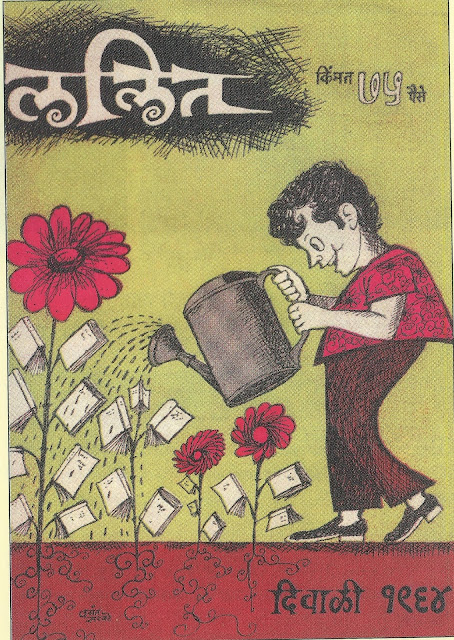 This is the first Lalit Diwali cover Sarwate drew in 1964.  I was four, my brother was two and my sister was in my mother's womb!

The small plant he started watering is still alive. It's a fantastic news in a brutal world of Marathi periodicals because many of Lalit's sisters who were around then have perished.

Posted by Aniruddha G. Kulkarni at 9:00 AM 4 comments: Links to this post