How About Comic Books on India’s Partition and The Great Bengal Famine?

I subscribe to Economic & Political weekly and Samaj Prabodhan Patrika समाज प्रबोधन पत्रिका. (p.s. As of October 2012, I don't). I respect them a lot but most writing there, alas, remains arcane to a commoner like me. These publications also remain committed to “isms” and hence don’t want to consider any other view inconsistent with their own.

What can be done?

I recently wrote about the power of comic books after reading NYT editorial of January 3, 2008- “Comic Books in the Classroom”.

Looks like comic books can come handy to teach even touchy and sensitive historical topics.

“German schools will launch a comic book next week that aims to teach above all underprivileged children about the Nazi era and the Holocaust.

Although German schools already make a big effort to give pupils a thorough education about the Nazi era, racist violence remains a problem, and the revival of Germany's Jewish community has brought a rise in anti-Semitism with it.

The Tintin-style comic book is called "The Search," and tells the story of Esther, a fictional Jewish survivor of the Holocaust.

… The book, based on fact, describes how Jews in Germany and the Nazi-occupied Netherlands experienced the genocidal Nazi persecution that took the lives of 6 million European Jews.

It includes the Night of Broken Glass in November 1938, when Jews were beaten and their homes, businesses and synagogues were ransacked and, later on, the deportations to the Auschwitz concentration camp.

Through pictures and realistic dialogue, the book depicts the suffering and humiliation that Jews endured as they were stripped of their livelihoods, ostracized and, finally, sent to camps to be worked to death or gassed…”.

As a child I was not taught severity of either of the events. My 13-year-old son still doesn’t know enough about either of them.

So why not comic books? 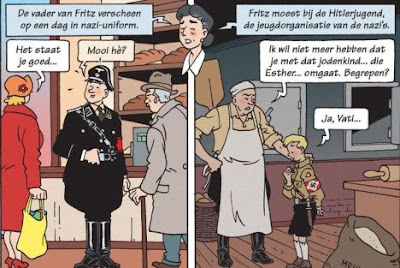 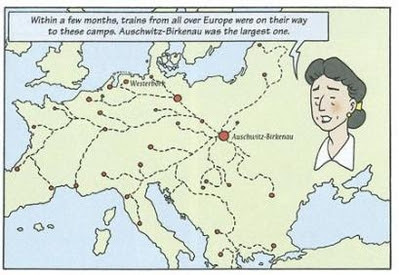