"To accelerate research breakthroughs on brain diseases, the Allen Institute puts all its data online for use without fees."

I knew so little about Jagadish Chandra Bose before I read Stefany Anne Golberg's article "If You Pick Us, Do We Not Bleed?" dated Nov 22 2011.

"...He was the first person from the Indian subcontinent to receive a U.S. patent, and is considered one of the fathers of radio science, alongside such notables as Tesla, Marconi, and Popov...For Bose, thinking of life as a unity wasn’t just about theories — it had real world implications. Though patents were granted to Bose, he never sought them out for personal gain, preferring that his inventions be "open to all the world to adopt for practical and money-making purposes."..."

There have been some very moving obituaries written in Marathi.

But the best obit I have read in Marathi- and one of the best in any language- is by T S Shejwalkar (त्र्यं. शं. शेजवलकर) writing on V K Rajwade's death.

Three years after Rajwade's death, in December 1929, Shejwalkar invokes Robert Browning's "A Grammarian's Funeral" for it.

Shejwalkar quotes this from Browning peom:

"He would not discount life, as fools do here,
Paid by instalment.
He ventured neck or nothing-heaven's success
Found, or earth's failure:
"Wilt thou trust death or not?" He answered "Yes:
Hence with life's pale lure!"
That low man seeks a little thing to do,
Sees it and does it:
This high man, with a great thing to pursue,
Dies ere he knows it.
That low man goes on adding one to one,
His hundred's soon hit:
This high man, aiming at a million,
Misses an unit. "

and goes on to say:

"...By which yardstick will you compare (Ramakrishna Gopal) Bhandarkar, who never avoided the writing of even the most profitable textbooks, with Rajwade who printed on his books "no rights are reserved"?..."

"CC0 enables scientists, educators, artists and other creators and owners of copyright- or database-protected content to waive those interests in their works and thereby place them as completely as possible in the public domain, so that others may freely build upon, enhance and reuse the works for any purposes without restriction under copyright or database law."

What is the difference between 'creative commons' and copyright? Here is an artist's naughty answer: 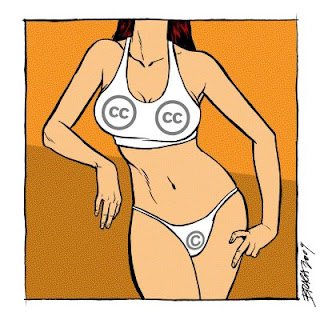