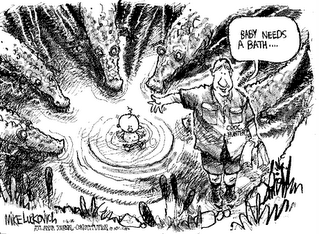 Steve's baby survived on that day but he was not so lucky later....

“The animal world has finally taken its revenge on Irwin, but probably not before a whole generation of kids in shorts seven sizes too small has learned to shout in the ears of animals with hearing 10 times more acute than theirs, determined to become millionaire animal-loving zoo-owners in their turn”

“some things in nature should be left alone. He (Steve Irwin) clearly took a lot of risks and television encouraged him to do that.. It's a shame that television audiences need that to be attracted to wildlife. Dangerous animals, you leave them alone because they will defend themselves. Nature defends itself, it isn't all about hugging animals and going 'ahh'. It's wonderful to observe but you have to be sensible and maintain a safe distance. Television has become very gladiatorial and it's not healthy. The voyeurism we are seeing on television has a cost and it's that cost Steve Irwin's family are paying today."
Posted by Aniruddha G. Kulkarni at 11:49 AM No comments: Links to this post 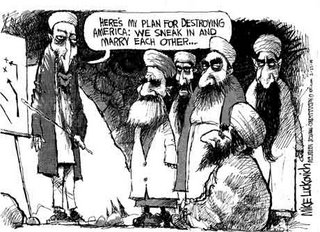 Right wing Americans have made mountain out of molehill of gay marriage. There are fierce debates raging across the land. At times, it seems to be the most important issue around in US. Even more than terrorism.

Richard Dawkins, "America, founded in secularism as a beacon of eighteenth century enlightenment, is becoming the victim of religious politics, a circumstance that would have horrified the Founding Fathers. The political ascendancy today values embryonic cells over adult people. It obsesses about gay marriage, ahead of genuinely important issues that actually make a difference to the world."

Osama has sensed it and is seen ordering his troops to get married to each other instead of driving planes into buildings!
Posted by Aniruddha G. Kulkarni at 11:40 AM 7 comments: Links to this post 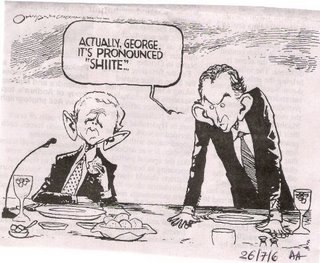 George Bush is not known for either general knowledge or a gift of gab. Just before he became President of US, he could not name Pakistan's President.

One redeeming feature is, he himself laughs at his clumsiness with these things.

Here, he is having hard time pronouncing a sect of Islam without swearing! Small wonder Shia militias have gone berserk in Iraq!
Posted by Aniruddha G. Kulkarni at 11:30 AM No comments: Links to this post

Acid from the battery 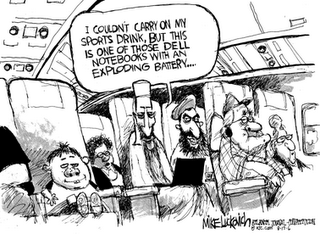 Airline security went paranoid after the London terrorist plot was exposed. Passengers were banned from carrying even harmless drinks on board.

But laptops were allowed. With faulty Sony batteries.

Recipe for disaster!
Posted by Aniruddha G. Kulkarni at 11:19 AM No comments: Links to this post