Navratris in the New York city!

“Solved: Post-Navratri abortion: It's a revolution of sorts. Social researchers waiting to dish out those cliched surveys on abortion rates after Navratris in Gujarat, are in for some disappointment. Because revellers, especially girls, are shedding inhibitions and walking up to the neighbourhood chemist asking for condoms.

And invading the market are the Cobras, Draculas, Skinless Skin — all brands of condoms from China. With the nine nights of revelry having peaked over the week-end gone by, chemists are confessing that condom sales are up by up to 50 per cent…”

"'Safe, legal and rare" has long been the pro-choice mantra, but these days it applies less and less to the reality of abortion. In New York City, officials reported this year that 41% of pregnancies end in abortion—double the national rate. In the black community, the figure is 60%..."

'Double the national rate' means 20.5% of all US pregnancies are aborted.

"Numbers like these motivate the Sisters of Life, a small order of nuns celebrating its 20th anniversary this summer. The sisters take traditional vows of poverty, chastity and obedience, but they also take a fourth vow "to protect and enhance the sacredness of human life.""

I wonder what percentage of total pregnancies get terminated in India but I am sure it's not comparable to US rate at all. Especially if you take out terminations on account of female foeticides in India.

As a nation, middle-class India has come a long way in the field of fertility.

As a kid I knew a few instances- like in Father of the Bride Part II- where mother and daughter or mother-in-law and daughter-in-law were pregnant at the same time in a middle-class Brahmin household.

Did it demonstrate to the world virility of the senior male member in that household? Or was it a declaration of the lack of alternate entertainment avenues?

Mark Twain has said about Indian people: "It is a curious people. With them, all life seems to be sacred except human life." (Following the Equator; a Journey Around the World, 1897)

Human life too was sacred if it was male! 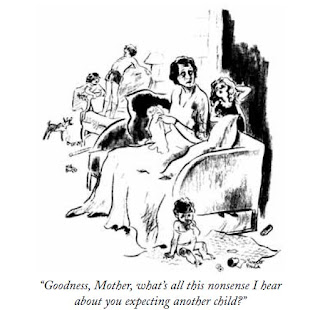