I am happy for SDM but have always felt that good art needs no certification. Rabindranath would be Rabindranath- Dnyaneshwar ज्ञानेश्वर of Bengali-without the Nobel.

A R Rahman may be very good but Indian cinema has created many similar musical giants since Kundan Lal (K.L.)Saigal. (Wasn't he the tallest of them all?)

David Pilling has written "Can slumdogs become millionaires in India?" in FT February 18, 2009.

He says: "...Why are there no slums in China? China is better run than India, with more powerful city mayors who build basic infrastructure to support wealth-creating migrants. Indian politicians court the rural vote. Corruption corrodes infrastructure plans, though some states, such as Gujarat, are improving. China is authoritarian; when workers are no longer required, they can be shipped back to the countryside. A registration system maintains a strict distinction between urban and rural citizens. Democratic India must not go down this route. But it can learn from China by providing clean water, sewerage and basic housing...

...One critic of the film said it was “inconceivable” that a tea-boy from the slum would be allowed on to a television quiz show. Until that changes, India will only progress so far."

So what Mr. Pilling? Watching "Boot Polish"(1954) and listening to its soulful music, people of this country had tears in their eyes and great hope in their hearts and they have clung on to them since then.

And then we will have SDM-II aka SDB. It will eclipse Godfather-II. 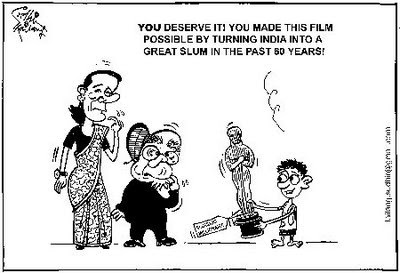 Artist: Sudhir Tailang, The Asian Age, February 24, 2009
Posted by Aniruddha G. Kulkarni at 9:08 AM No comments: Links to this post