India’s ex-Prime Minister H D Deve Gowda did a daylong ‘homa’ at his residence on July 4 to ward off ‘sarpa dosha’ reports Times of India July 5,2007.

“The six foot rat snake’s visit to his house on June 15 seems to be haunting him. The fall-out Gowda feels the negative publicity his family has been getting in the last few days must be due to this snake. For the homa, 101 priests along with their family members from Ahobila mutt in Chennai were specially invited.”

On May 8, 2006 , India’s larger-than-life cricketer Sachin Tendulkar performed the 'sarpa samskara seva' at Kukke Sri Subrahmanya Temple , a ritual that took about half-an-hour. He also performed another seva 'ashlesha bali', which is for the general well-being and good health of the player and his family. Spiritual mentor V S Nayak told Times Of India that Tendulkar's ancestors had accidentally killed a cobra but not performed the necessary rituals. This had led to the 'sarpa dosha'. Nayak said the rituals were needed for a person's well-being. He said there was no place other than Subramanya where it could be performed. "Sachin should have performed two more poojas. But due to lack of time, he will perform only these two important sevas," Nayak said.

Others reported: the master blaster's loss of form and injury problems were traced to adverse planetary positions for which corrective rituals took place.

Gowda’s puja was not televised while Tendulkar’s was on almost all news channels.

When I lived in Bangalore, I had witnessed a longer than six foot snake slowly making its way from just outside our gate to somewhere inside the garden, chasing perhaps frogs and rodents. I was spellbound by that glorious site. I did not know I had to do “sarpa dosha” after that.

I wonder if snakes should do “manushya dosha” so that humans turned more sensible. 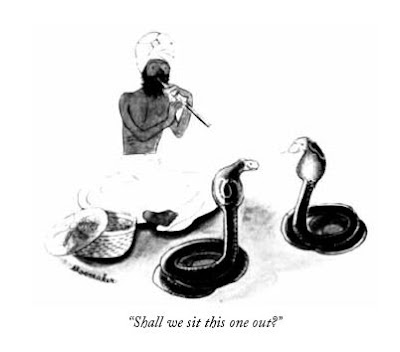