Are We Modern Humans Demon Taraka from Kalidasa's Kumārasambhava?

"Progress celebrates Pyrrhic victories over nature. Progress makes purses out of human skin. When people were traveling in mail coaches, the world got ahead better than it does now that salesmen fly through the air. What good is speed if the brain has oozed out on the way? How will the heirs of this age be taught the most basic motions that are necessary to activate the most complicated machines? Nature can rely on progress; it will avenge it for the outrage it has perpetrated on it...Progress, under whose feet the grass mourns and the forest turns into paper from which newspaper plants grow, has subordinated the purpose of life to the means of subsistence and turned us into the nuts and bolts for our tools."

(A Pyrrhic victory is a victory with such a devastating cost that it carries the implication that another such victory will ultimately lead to defeat. One of the meanings of pyrrhic- Of or relating to a war dance of ancient Greece. )

" I'm not aware of any studies showing that floods happen more often today than in the past. I also just attended a hydrologists' conference in Koblenz, and none of the scientists there described such a finding."

"The catastrophe in the Himalaya is the result of deforestation, unchecked construction of dwellings and large-scale building of big dams...neo-religious movements, linked to changing socio-political developments in India, are responsible for significant human movement into the Himalaya beyond the region’s carrying capacity, whether it is Amarnath in Jammu & Kashmir, Kedarnath, Badrinath, Gangotri and Hemkund in Uttarakhand. "

It describes the feelings of river Ganga as she lands on Lord Shiva's head on her way to the earth from heaven. She first felt very shy and then she blushed. 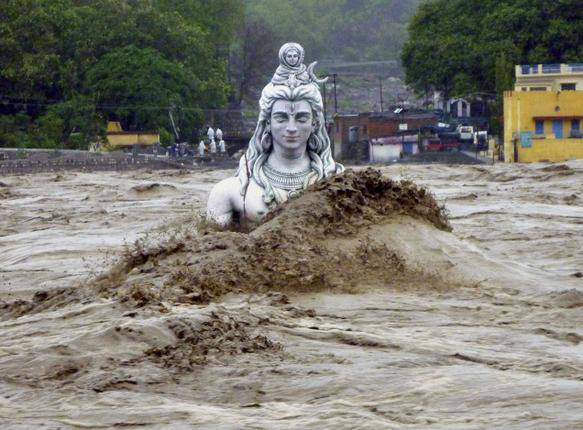 A submerged idol of Lord Shiva stands in the flooded Ganga at Rishikesh.

According to the Central Water Commission, the water level in the Ganga had risen 1m above the danger mark.  Photo courtesy: AP  courtesy: The Hindu, June 19 2013

Weather, climate change, 'global warming' are largely not responsible for what happened in Uttarakhand.

We, and what we do in the name of progress, are and the bizarre picture above reminded me of  Kālidāsa's  epic poem 'Kumārasambhava' (The Birth of the War-god).

The subject of the poem is the marriage of the god Shiva, the birth of his son, and the victory of this son over a powerful demon.


In the thirteenth canto, as translated by Arthur W. Ryder:

"Kumara takes an affectionate farewell of his parents, and sets out with the gods. When they come to Indra's paradise, the gods are afraid to enter, lest they find their enemy there. There is an amusing scene in which each courteously invites the others to precede him, until Kumara ends their embarrassment by leading the way. Here for the first time Kumara sees with deep respect the heavenly Ganges, Indra's garden and palace, and the heavenly city. But he becomes red- eyed with anger on beholding the devastation wrought by Taraka."


He saw departed glory, saw the state
Neglected, ruined, sad, of Indra's city,
As of a woman with a cowardly mate:
And all his inmost heart dissolved in pity.\
He saw how crystal floors were gashed and torn
By wanton tusks of elephants, were strewed
With skins that sloughing cobras once had worn:
And sadness overcame him as he viewed.

He saw beside the bathing-pools the bowers
Defiled by elephants grown overbold,
Strewn with uprooted golden lotus-flowers,
No longer bright with plumage of pure gold,
Rough with great, jewelled columns overthrown,
Rank with invasion of the untrimmed grass:
Shame strove with sorrow at the ruin shown,
For heaven's foe had brought these things to pass

Amid these sorrowful surroundings the gods gather and anoint Kumara, thus consecrating him as their general."

(Taraka in the following picture- from Ramayana- is a different figure than the one that appears in  Kumārasambhava.) 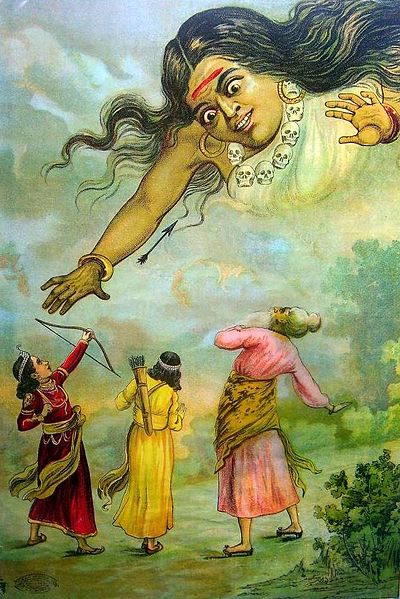