the passage of time

Simone Weil
“All the tragedies which we can imagine return in the end to the one and only tragedy: the passage of time.” 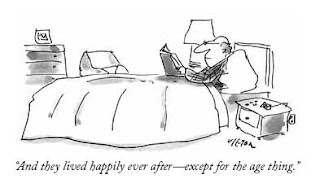 Posted by Aniruddha G. Kulkarni at 5:27 PM No comments: Links to this post

Indians are increasingly being asked to save more for their health care by going in for health insurance. Their neighbourhood doctor no more treats them without myriad and expensive diagnostic tests. Health insurance we are told is the way to go.

Paul Krugman recently asked in his NYT column: "Is the health insurance business a racket?" He concludes: "It’s the ugly incentives provided by a system in which giving care is punished, while denying it is rewarded."

My limited personal experience has taught me that insurance companies invent ways to deny you benefit. Language is a powerful tool in their hand.......... 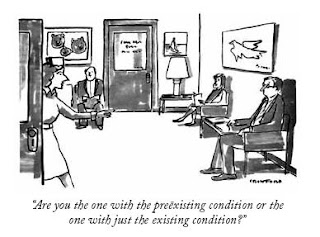 Artist: Michael Crawford Publication: The New Yorker 23 May 1994
Posted by Aniruddha G. Kulkarni at 5:05 PM No comments: Links to this post

George W. Bush has finally arrived with all his horns blazing! 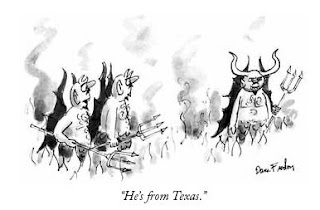 Marie Antoinette may or may not have said: "Let them eat cake". But we all know the sentiment behind such a statement.

For sure, ordinary folks have always suffered through history. Suffering on a scale, most of blog reading/writing people like us cannot imagine.

I am reading "The Last Mughal" by William Dalrymple. The debate whether 1857 events should be called first war of Indian independence or mutiny will go on but the overwhelming sense I get is the suffering of ordinary people of Delhi all through that.

Therefore, you wonder if D D Kosambi amongst all is closest to the truth when he says: “It seems to me that Gita philosophy, like so much else in India’s ‘spiritual’ heritage, is based in the final analysis upon the inability to satisfy more than the barest material needs of a large number”

There could be many Quixotian solutions to this. Use politically correct language. Stop calling poor, poor! Stop calling third class compartment, third class. That is what Indian Railway did when one day they just erased one line from III to make it II! 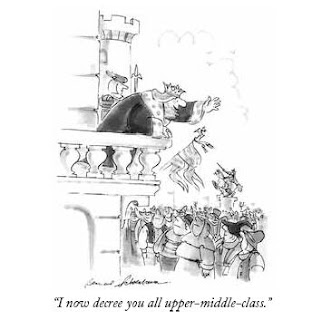 Posted by Aniruddha G. Kulkarni at 12:47 PM No comments: Links to this post

A lot of Hindi films has this dialogue- "I am going to be mother of your child."

And then all hell breaks loose! It always is 'information of startling nature' to the receipent of the news. As if stokes indeed got the babies. 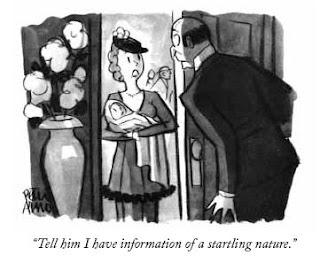 Artist : Peter Arno Publication: The New Yorker 26 Dec 1936
Posted by Aniruddha G. Kulkarni at 11:40 AM No comments: Links to this post

Every generation has its fads. (needless to say older generations don't like most of them. Socrates: “Children nowadays love luxury, have bad manners, contempt for authority, disrespect for elders”).

Most interesting of those fads is their language. You would be very lucky to understand it if you are not one of them. SMS makes it even worse -that 'weird' language is further transformed. 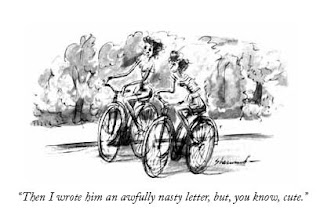 Artist : Barbara Shermund Publication: The New Yorker 20 Jun 1936
Posted by Aniruddha G. Kulkarni at 11:13 AM No comments: Links to this post