On May 11, 2007, FT reviewed a book - Flat Earth: The History of an Infamous Idea by Christine Garwood.

“…it wasn’t Columbus’s Atlantic expedition which made people realise the world was spherical. Pythagoras and his school are credited as the first to make this observation in the 6th century BC. Aristotle may have thought that the earth was at the centre of the universe but he at least came up with proof that it was curved: the hull of a ship on the horizon sinks out of sight before the mast. So when ”Parallax”, one of the aliases used by snake-oil salesman Samuel Rowbotham, began to propound his flat-earth ideas in the 19th century, he was pushing back the clock by a good two millennia….

Garwood has produced an intriguing chronicle of 150 years of self-delusion, from Parallax in the mid-19th century to the late 20th century’s Charles Johnson, who pushed membership of the International Flat Earth Society of America well into triple figures…

Instead of dishing out the ridicule which these fundamentalists invite, Garwood remains dispassionate and understanding.”

I liked the last part: author remains dispassionate and understanding and doesn’t ridicule.

The attack, residents reported, led electrical appliances such as fridges, TVs and kettles to suddenly burst into flames. They also claimed to have seen UFOs flying overhead at the time of the fires.

Dozens of experts, including a scientist from the US space agency NASA were sent to investigate the bizarre blaze, in a two-year probe which cost the exchequer a whopping one million pounds.Now, a leaked Italian report has said that aliens were a likely cause of the fires in the remote village of Canneto di Caronia in Sicily. “

When I read this, I started laughing and soon turned angry but then Carl Sagan’s following words doused my fires.

“We are all flawed, and creatures of our time. Is it fair to judge as by the unknown standards of the future? Some of the habits of our age will doubtless be considered barbaric by later generations- perhaps for insisting that small children and even infants sleep alone instead of with their parents; or exciting nationalist passions as a means of gaining popular approval and achieving high political office; or allowing bribery and corruption as a way of life; or keeping pets; or eating animals and jailing chimpanzees; or criminalizing the use of euphoriants by adults; or allowing our children to grow up ignorant.”

While reviewing The Fellowship: The Story of a Revolution By John Gribbin, The Economist said in August 2005:

“. Although scientists devised beautifully neat formulae to explain complicated phenomena, the scientific revolution itself was a messy business.
For a start, some natural philosophers refused to behave like scientists. Newton spent many of his best years working away on theology and alchemy, rather than dutifully laying down the foundations of modern physics. The experiments at the heart of the new philosophical method were often hard to replicate. Boyle's famous air pumps, for example, were always leaking. And by the 18th century, when the revolution really ought to have been over, armillary spheres were still being produced with the Ptolemaic and Copernican heavens side by side, as if the makers had hedged their bets.”

Therefore, we all need to work harder and stay focused to take science to the society.

Until we see them, Martians should firmly remain in delightful cartoons like the one below.

If earth was finally proven to be round, rewards of patience are rich! 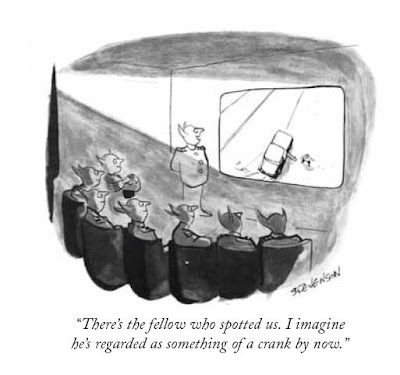 Artist: James Stevenson The New Yorker 13 September 1958
Posted by Aniruddha G. Kulkarni at 11:29 AM No comments: