Life is first boredom? Not when Shammi-mama is on a song

“You must have chaos within you to give birth to a dancing star.”

"You could argue that the Fred Astaire film is performing a greater service than the Bergman film, because Bergman is dealing with a problem that you're never going to solve. Whereas Fred Astaire, you walk in off the street, and for an hour and half they're popping champagne corks and making light banter and you get refreshed, like a lemonade."

Casey Walker: "After all, Shakespeare’s work, like the moon, is a vast place; it exists not in some perfect superhuman archive, but in parallax view, from Earth, one reader at a time."
Govindrao Tembe:

"I consider Narayanrao very cultured man because he never talks about himself."

As I have often felt, as a kid, movies were always surreal for me and I think it all started with Janwar (1965).

Our favourite Shashi-mama (शशी-मामा) who had already seen the movie more than a dozen times (!) took me to Janwar that was playing at Deval (देवल ) talkies in Miraj (मिरज ).
Even today I recall 'LAAL CHADI MAIDAN KHADI' (लाल छड़ी मैदान खड़ी) playing on silver screen.

An Evening in Paris (1967) is my favourite movie. First time, I watched its matinee show (3 PM) at Kolhapur (कोल्हापुर) after going through an overwhelming experience of standing in a boisterous queue in the hot sun for eternity to buy a ticket.

This went on and one day, after watching Brahmchari (1968), Shammi Kapoor became Shammi-mama.

Why did he become Mama? We almost never had my father's four brothers visiting us and mother's three brothers didn't come that often too. So we met Shammi Kapoor more often than any of them. And like Bart Simpson tells his father: "It's just hard not to listen to TV: it's spent so much more time raising us than you have." (Episode: 2F06 “Homer Bad Man” Original air-date: 27-Nov-94)

I still remember how, while watching Brahmchari, sitting with my mother in 'Ladies' of Deval cinema in Miraj, I got to my feet and started cheering wildly during his fight with Pran towards the end of the movie.

I want to not just hear but watch 'Main Gaoon Tum So Jao' (मैं गाऊँ तुम सो जाओ) followed by a poem or two of Tukaram (तुकाराम).

No author, no playwright, no actor, no singer, no cricketer, no athlete, no music composer, no cartoonist, no poet, no stand-up comedian has entertained me more than Shammi Kapoor.

“Life is first boredom
Then fear.”

Maybe. But how fortunate we are that we have remedy in the form of Shammi Kapoor for the first.

Another characteristic of the late Mr. Kapoor was he seldom talked about himself in all the TV interviews he gave in recent years. It was always about music composers, Mohammad Rafi, co-stars, directors, his parents, brothers, his own family...And when he turned to himself, it was all self-deprecating humour. (For instance: "Ranbir Kapoor and others came over and pulled my leg...or whatever is left of them!", "If I were to become aeronautical engineer, more Mig aircrafts would have crashed than what they today!")

Mr. Kapoor said if his film 'Tumsa Nahin Dekha' (1957) had flopped, he would have gone to Assam and become a tea garden manager, riding horse with a whip in hand and whiskey in back pocket!

I lived on a tea estate of Assam from 1989-90. I never saw a horse on any tea estate of Upper Assam or manager with a whip but kept seeing fair bit of whiskey in glasses and Mr. Kapoor on TV.

However, I think I was destined to meet him. If not on silver screen surrounded by pitch-darkness, it would have been at Doom Dooma planters club! (We lived next to the club.) 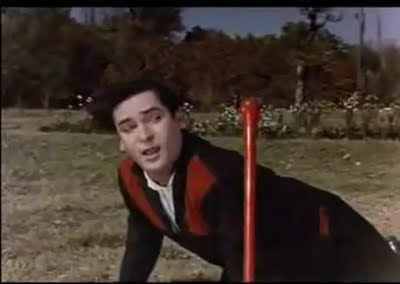