का आतां ही एसी विलेक्ट्रिकीची...the Battle of the Currents and the Terror of Technology

I read in Marathi daily Loksatta on Friday December 19 2014 that Mumbai suburban trains will now run on AC instead of DC.

Human history is replete with not just battles of humans against humans. And even those other battles have been bloody.

This brought to my mind a wonderful book: "Edison and the Electric Chair: A Story of Light and Death" by Mark Essig,  2005:

Its description is self explanatory and knocks great T A Edison off his pedestal:

"Thomas Edison stunned America in 1879 by unveiling a world-changing invention—the light bulb—and then launching the electrification of America's cities. A decade later, despite having been an avowed opponent of the death penalty, Edison threw his laboratory resources and reputation behind the creation of a very different sort of device—the electric chair. Deftly exploring this startling chapter in American history, Edison & the Electric Chair delivers both a vivid portrait of a nation on the cusp of modernity and a provocative new examination of Edison himself. Edison championed the electric chair for reasons that remain controversial to this day. Was Edison genuinely concerned about the suffering of the condemned? Was he waging a campaign to smear his rival George Westinghouse's alternating current and boost his own system?.."


"Alternating current triumphed in the battle of the currents for the same reasons that attracted George Westinghouse to it in the first place. It could be produced at relatively low voltages, stepped up to higher voltages with transformers for economical transmission over long distances, and then stepped down to any voltage required. As electricity expanded into every aspect of life, alternating current offered a flexibility that direct current could not hope to match. By 1917 more than 95 percent of the electricity generated in the United States would be alternating current." 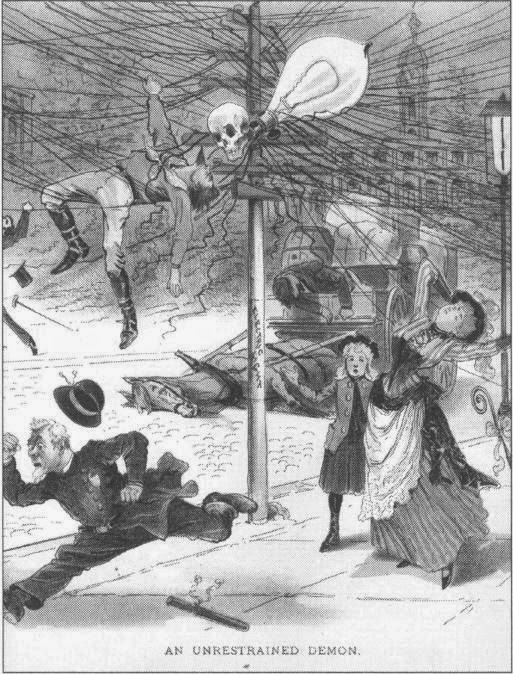 The picture caught my attention because Mumbai suburban trains have become so unsafe for commuters  in recent years, for various reasons,  that some of them sure feel like running away from the 'demon' the way the gentleman in the picture above is running away from the demon of  electricity.
Posted by Aniruddha G. Kulkarni at 9:00 AM No comments: Links to this post