Selling of Heritage, Fragment by Fragment!

“…The most famous artifact the scholars discovered was the Rosetta stone, which soon wound up in British possession. The French military leadership, ever impatient with the scientists left in their care, bargained it away, along with all the scientists’ notes, drawings and specimens, in the truce that finally allowed them to return home. To this day it sits in the British Museum despite Egypt’s request for its return, with a label that says only “Captured in Egypt by the British Army in 1801, presented by King George III.” Perhaps it was historic justice that a Frenchman eventually cracked the code (working from copies), in 1822.

…The book’s legacy — and the legacy of Napoleon’s Egyptian adventure — was enormous, prompting the half-century of Egyptomania that swept Europe. The resulting decades of plunder brought Cleopatra’s Needle to New York, the Luxor obelisk to the Place de la Concorde, and room after room of mummies to the Metropolitan Museum, the British Museum and the Louvre. Two hundred years later, a new struggle over national cultural heritage may in the end restore at least some of this magnificence to its country of origin.”

We all know India was looted of its treasures during the British Raj and is being done so during the Indian Raj. But now I begin know the price tag of the loot!

Times of India reported on November 26, 2007 an example of how “precious” our heritage is in dollar terms!

See the picture below of Avlokitesvara and Green Schist Gable Relief circa 2nd-3rd century.

It may be interesting to put up a price tag outside each archeological site to let people know the worth of what they are viewing and how careful they should be. 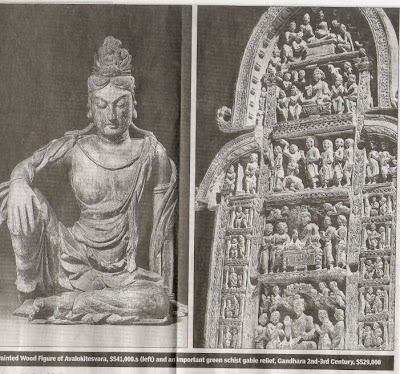 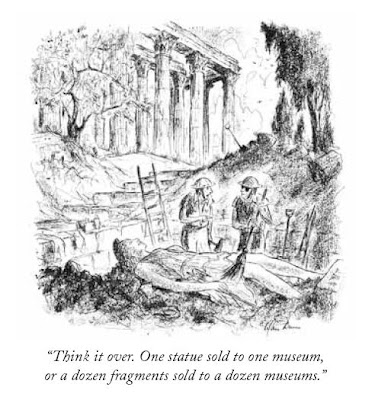 Artist: Alan Dunn The New Yorker 7 March 1959
Posted by Aniruddha G. Kulkarni at 9:15 AM No comments: