For last few years, Nepal- world’s only Hindu kingdom- has been in the news for wrong reasons- regicide, lawlessness, illegal trades in drugs and arms, hijacking etc.

“I CAN only dance when I'm drunk,” confides Srijana, a 20-year-old employee of the Pussy Cat Bar and Shower, a tavern in Thamel, Kathmandu's main tourist hangout. A few slurps from a customer's glass later and she mounts a small stage. There, to whoops from a few tipsy locals, she sheds most of her clothes and gyrates to a Hindi pop tune. Dangling above her is the Damoclean sword included in the bar's name: a silver shower nozzle, positioned to spray flesh-revealing water on a dancer below.

Such gimmicks are common in Thamel's bars, where competition for lascivious males is fierce. Until a few years ago Nepal had no obvious sex industry. There are now an estimated 200 massage parlours and 35 “dance bars”, such as the Pussy Cat, in Thamel alone—with over 1,000 girls and women working in them. Many sell sex. In the Pussy Cat, another dancer admits to turning tricks, for 1,800 rupees ($28).

That is a tidy sum in Nepal, South Asia's poorest country. It is much more than Nepali women are paid in India's flesh-pots—to which over 5,000 are trafficked each year, according to the UN. But the dancers in Thamel are chasing a richer sort of Indian: tourists. And their government seems to be encouraging them. In an advertisement for “Wild Stag Weekends”, the Nepal Tourism Board offers this advice: “Don't forget to have a drink at one of the local dance bars, where beautiful Nepali belles will dance circles around your pals.”

In a country with a rich tradition of dance, where paying for sex is illegal, this might be harmless innuendo. But not everybody thinks so. During the recently-ended civil war, Nepal's Himalayan tourism industry collapsed. Some activists think that sex tourism is replacing it. According to John Frederick, an expert on South Asia's sex trade, “Ten years ago the sex industry was underground in Nepal. Now it's like Bangkok, it's like Phnom Penh.”

The war, which put much of rural Nepal under the control of Maoist insurgents, has increased the supply of sex workers…”

A silver shower nozzle, positioned to spray flesh-revealing water on a dancer below?!

“ (Nepali film) Kagbeni also has the distinction of having Nepal's first onscreen amorous kiss. And a large section of the Himalayan kingdom has been tickled by the minute-long liplock between the lead pair Saugat Malla and Deeya Maskey…” 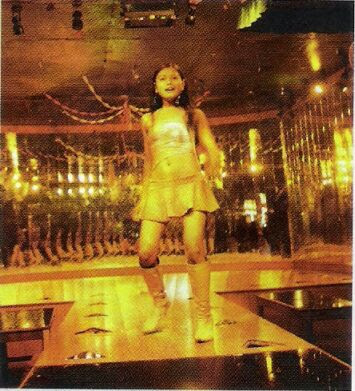 Posted by Aniruddha G. Kulkarni at 5:30 AM 8 comments: Links to this post