Putting the Skinned Knees Back Into Playtime

During my school days (1965-1975) at Miraj, I wore shoes or chappals only reluctantly because they were a hindrance to free movement. There also was an added danger of forgetting them (costly items then and now) if taken off. Our pastimes did not particularly need them either.

The biggest pastime of them all was playing marbles. Two games called Benda (which since then I have realized had strong sexual undertones) and Yanhee-Ganda (literally means female and male in Kannada). Followed by Kabaddi, Aatya-Patya, Gilli-Danda, road-side barefoot Cricket and few other games which are hard to describe but thoroughly enjoyable. All under blue sky. Most times on the roadside. Occasionally on playgrounds or courtyard of a big house such as Arvind Bedekar's (where his sister Alka too would join)/ Srinivas Thanedar's Vada. Only extreme hot summer day would force us to play indoors.

We did not mind dirt (I did not think twice fetching a ball from big, open sewer), injuries (I carried skinned knees with little pus most times), heat (30+ Celsius), hunger pangs (forever hungry) and occasional mouthful by someone who felt pestered by our games (e.g a gentleman called Khare who ran a small handloom mill and hated our cricket ball hitting his tin shade). Note I have not mentioned vehicular traffic because there was not much.

Although my wife and I encourage our son to play outdoors, surely he is having less fun than what I had. When I won at marbles really good, I felt like Livermore in picture below. We did not talk to girls out in the open back then so she would be missing from my picture!

ALEX WILLIAMS has written an excellent essay on this “Putting the Skinned Knees Back Into Playtime” (NYT May 20, 2007).

“………Back then, children didn’t need to take seminars to learn to play a no-tech, simple game. In the era of micromanaged play dates, overstuffed after-school schedules, cuts to recess and parents terrified of injuries, lawsuits and predators, many traditional childhood games have become lost arts, as antique as the concept of idle time itself.

But lately, a number of educators like Mr. Cohill, as well as parents and child-development specialists are trying to spur a revival of traditional outdoor pastimes, including marbles, hopscotch, red rover and kickball. They are attending play conferences, teaching courses on how to play, and starting leagues for the kinds of activities that didn’t used to need leagues — just, say, a stick and a ball. They are spurred by concerns that a decline in traditional play robs the imagination and inhibits social interaction, by personal nostalgia, and by a desire to create a new bridge to connect generations — a bridge across both sides of the Nintendo gap.

Although their efforts have mostly yielded modest results, a hint that they may be on to something comes with the success of an unlikely best seller, “The Dangerous Book for Boys” (Collins), a sepia-toned celebration of the lost arts of childhood, complete with information on how to make a tree house, fold paper airplanes and skip stones. Within days of its publication earlier this month, the book had soared to No. 2 on Amazon’s sales ranking, right behind the latest Harry Potter installment. The book, by Conn Iggulden and Hal Iggulden, sells for $24.95 in hardcover and may be appealing as much to fathers who are nostalgic for a youth they never quite had as to children.

Conn Iggulden said in an e-mail message that he routinely received correspondence from parents who yearn for a “return to simple pleasures,” which seems to stem from “potent forces, like the realisation that keeping your kids locked up in the house on PlayStations isn’t actually that good for them; or the appalled reaction of many parents to a health-and-safety culture that prevents half the activities they took for granted as kids — and that they know were important to their growth and confidence.”
“ 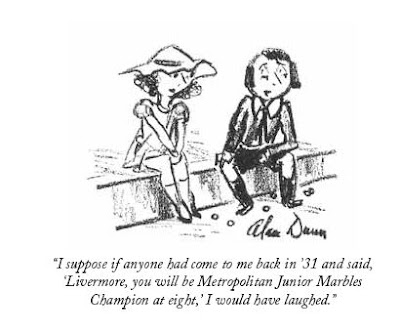 Artist: Alan Dunn The New Yorker 24 June 1933
Posted by Aniruddha G. Kulkarni at 11:13 AM No comments: Links to this post