In recent days, I have been recommended, especially by the women, Marathi TV serial "Unch Majha Jhoka" (उंच माझा झोका)...My Swing At High.

I have tried to watch the serial but have so far been disappointed by it. Thus far there has not been much to it beyond costumes and sets, just like the recent film on the life of Bal Gandharva (बाल गंधर्व).

And even they don't look very authentic.

Most women in the serial have threaded eyebrows, their nine-yards sarees that are worn in kitchen glitter, their Marathi diction sounds very artificial...

My mother's mother, a Chitpavan Brahmin like Ranade family, was borne around the start of the 20th century and I still distinctly remember her diction, gestures, attire...and eyebrows!

But I guess the rest of the Marathi TV serials are perhaps so trashy that people find some solace in "Jhoka".

One good thing the serial does is that it reminds people of Ranade.

("indulgence instead of social reforms; narrow middle-class sentiments instead of moderation praised even by Ramdas; opportunism instead of political idealism, petty casteism instead of global brotherhood, such vices are seen to be thriving in Maharashtra. During such times rereading of Ranade's writings and rumination on his life are expected to be beneficial.")

But the real eye opener on Ranade was recently reading Dr. B R Ambedkar's (भी रा आंबेडकर)- himself the greatest Indian of 20th century for me- speech that was delivered on January 18 1943 at Gokhale Memorial Hall, Poona.

I was stunned by Ambedkar's intellect and learnt why indeed Ranade is considered great.

...Indeed it would be difficult to find in the history of India any man who could come up to Ranade in the width of his learning, the breadth of his wisdom and the length of his vision. There was no subject which he did not touch and in which he did not acquire profundity. His reading was on the scale of the colossal and every inch he was a scholar. He was great not merely by the standard of his Time, but he was great measured by any standard. As I have said no claim for being a great man can rest on the foundation of sincerity and intellect either singly or in combination. Ranade could not be called great if he had these two qualities and no more. His title to being a great man must rest upon the social purposes he served and on the way he served them. On that there can be no doubt. Ranade is known more as a social reformer than as a historian, economist or educationist. His whole life is nothing but a relentless campaign for social reform. It is on his role as a social reformer that this title to being a great man rests...

...His path as a reformer was not smooth. It was blocked from many sides. The
sentiments of the people whom he wanted to reform were deeply rooted in the ancient past. They held the belief that their ancestors were the wisest and the noblest of men, and the social system which they had devised was of the most ideal character. What appeared to Ranade to be the shames and wrongs of the Hindu society were to them the most sacred injunctions of their religion. This was the attitude of the common man. The intelligentsia. was divided into two schools—-a school which was orthodox in its belief but unpolitical in its outlook, and a school which was modem in its beliefs but primarily political in its aims and objects. The former was led by Mr. Chiplunkar and the latter by Mr. Tilak. Both combined against Ranade and created as many difficulties for him as they could. They not only did the greatest harm to the cause of social reform, but as experience shows they have done the greatest harm to the cause of political reform in India...

...Ranade's aim was to cleanse the old order if not to build a new one. He insisted on improving the moral tone of Hindu society. If he had been heard and followed, the system would have at least lost its rigours and its rigidity. If it could not have avoided Communal settlement it would have made it easy. For his attempts, limited as they were, would have opened the way to mutual trust. But the politicals had developed a passion for political power which had so completely blinded them that they refused to see virtue in anything else. Ranade has had his revenge. Is not the grant of political safeguard a penalty for denying the necessity of social reform ? How much did Ranade achieve in the field in which he played so dominant a part ? In a certain sense the question is not very important. Achievement is never the true measure of greatness..."

Ambedkar then goes on to compare Ranade to Gandhi and Jinnah:

"...Who are the present day politicians with whom Ranade is to be compared ? Ranade was a great politician of his day. He must therefore be compared with the greatest of today. We have on the horizon of India two great men, so big that they could be identified without being named—Gandhi and Jinnah. What sort of a history they will make may be a matter for posterity to tell. For us it is enough that they do indisputably make headlines for the Press. They hold leading strings. One leads the Hindus, the other leads the Muslims. They are the idols and heroes of the hour. I propose to compare them with Ranade. How do they compare with Ranade ? It is necessary to make some observations upon their temperaments and methods with which they have now familiarized us. I can give only my impressions of them, for what they are worth. The first thing that strikes me is that it would be difficult to find two persons who would rival them for their colossal egotism, to whom personal ascendancy is everything and the cause of the country a mere counter on the table. They have made Indian politics a matter of personal feud. Consequences have no terror for them ; indeed they do not occur to them until they happen. When they do happen they either forget the cause, or if they remember it, they overlook it with a complacency which saves them from any remorse. They choose to stand on a pedestal of splendid isolation. They wall themselves off from their equals. They prefer to open themselves to their inferiors. They are very unhappy at and impatient of criticism, but are very happy to be fawned upon by flunkeys. Both have developed a wonderful stagecraft and arrange things in such a way that they are always in the limelight wherever they go. Each of course claims to be supreme. If supremacy was their only claim, it would be a small wonder. In addition to supremacy each claims infallibility for himself...

...Politics in the hands of these two great men have become a competition in extravaganza. If Mr. Gandhi is known as Mahatma, Mr. Jinnah must be known as Qaidi-Azim. If Gandhi has the Congress, Mr. Jinnah must have the Muslim League. If the Congress has a Working Committee and the All-India Congress Committee, the Muslim League must have its Working Committee and its Council. The session of the Congress must be followed by a session of the League. It the Congress issues a statement the League must also follow suit. If the Congress passes a Resolution of 17,000 words, the Muslim League's Resolution must exceed it by at least a thousand words. If the Congress President has a Press Conference, the Muslim League President must have his. If the Congress must address an appeal to the United Nations, the Muslim League must not allow itself to be outbidden. When is all this to end? When is there to be a settlement? There are no near prospects. They will not meet, except on preposterous conditions. Jinnah insists that Gandhi should admit that he is a Hindu. Gandhi insists that Jinnah should admit that he is one of the leaders of the Muslims. Never has there been such a deplorable state of bankruptcy of statesmanship as one sees in these two leaders of India. They are making long and interminable speeches, like lawyers whose trade it is to contest everything, concede nothing and talk by the hour. Suggest anything by way of solution for the deadlock to either of them, and it is met by an everlasting "Nay ". Neither will consider a solution of the problems which is not eternal. Between them Indian politics has become "frozen" to use a well-known Banking phrase and no political action is possible.

How does Ranade strike as compared to these two ? I have no personal impression to give. But reading what others have said I think I can say what he must have been like. He had not a tinge of egotism in him. His intellectual attainments could have justified any amount of pride, nay even insolence. But he was the most modest of men. Serious youths were captivated by his learning and geniality. Many, feeling completely under his sway, responded to his ennobling influence and moulded their whole lives with the passionate reverence for their adored master. He refused to be satisfied with the praises of fools, and was never afraid of moving in the company of equals and of the give and take it involves. He never claimed to be a mystic relying on the inner voice. He was a rationalist prepared to have his views tested in the light of reason and experience. His greatness was natural. He needed no aid of the stage nor the technique of an assumed eccentricity nor the means of a subsidized press. As I said, Ranade was principally a social reformer. He was not a politician in the sense of one who trades in politics. But he has played an important part in the political advancement of India. To some of the politicians he acted as the teacher who secured such signal successes and who dazzled their critics by their brilliance. To some he acted as the guide, but to all he acted as the philosopher..." 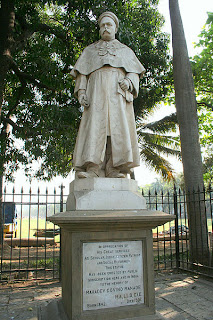 He was not only big in his physique...Ranade statue standing at Churchgate, Mumbai 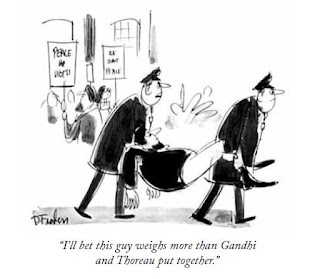