"...I noticed how often dogs played critical roles in Hindu texts, first as symbols of impurity (because they are scavengers , eating garbage) and then as symbols of devotion (because there is no one as devoted as a devoted dog). And that contrast seemed to me to epitomize the broader contrast between the caste-bound aspect of Hindu dharma , so fixated on purity, and the compassionate aspect of Hindu bhakti, which transcends ideas of purity."

The word 'vital' (विटाळ)- roughly meaning ritual pollution or pollution in English-  was very 'popular' when I was a kid. For example, when a woman was menstruating, she was considered 'vitalshee' (विटाळशी), polluted.

I haven't heard that word for a while in my family circle.

Bloomberg July 25 2013 has a story titled: "No Menstrual Hygiene For Indian Women Holds Economy Back"

"Sushma Devi, a mother of three in Northern India, stores her “moon cup” on the window sill of the mud-brick veranda that shelters the family goats.

In a village where few have indoor toilets and the Hindi word for her genitals is a profanity, 30-year-old Sushma struggles to talk about how she manages her period and the changes brought by the bell-shaped device she inserts in her vagina to collect menstrual blood.

“It’s a thing from hell,” she says of the malleable, silicone cup, which she received from a Massachusetts Institute of Technology research group. “I have to keep it far from the house, from where I pray.”
Across the world’s largest democracy, where a decade of economic growth nearing 8 percent a year has tripled per-capita income, millions of women are held back by shame around their most basic sanitary needs..."

So whatever word you choose, Sushma Devi feels "polluted" (विटाळ) on "those days" and considers her MIT-designed "moon cup" a thing from hell.

Lucky her, Sushma Devi does not get Lysol treatment because once Lysol was recommended for both the women and the kitchen floors!

"...Lysol, which shares germicidal properties with carbolic acid, was a highly recommended treatment for "offensive" vaginal odors. This initiated a vicious cycle, so to speak: a self-conscious, but often healthy, woman would douche with Lysol and kill off normal flora (and scald her tissues), which would pave the way for bacterial/yeast infections, which WOULD cause an offensive odor, which would compel her to douche more often. Because an abnormal body odor in a normally clean person indicates an underlying problem, women who actually did have a raging infection only made matters worse with this frequent purging..."

(from 'Flow: The Cultural Story of Menstruation' by Elissa Stein and Susan Kim, 2009)

Q: What was common to a woman working in a kitchen and the kitchen floor?

A: Both were disinfected with Lysol, a household cleaner! 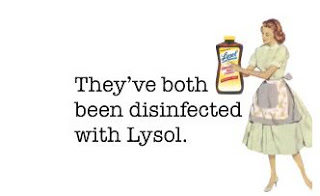 Read more on this by visiting here and here. 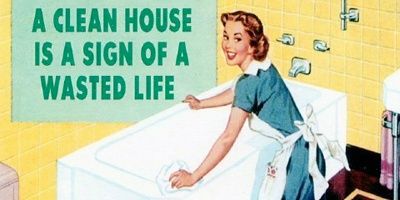 courtesy: http://thebrowser.com/fivebooks
Posted by Aniruddha G. Kulkarni at 9:00 AM No comments: Links to this post