When I finished reading -‘Ashtadarshane’ (अष्टदर्शने), 2003, I wrote a letter to Lalit (ललित) and sent a copy of that to (now) the late Vinda Karandikar.

Lalit published it and Vinda wrote back thanking me for it. 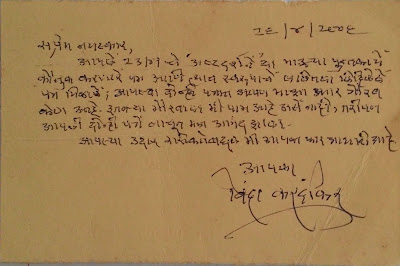 This is what I had said in the letter.

In Marathi, the late M P Rege (मे. पुं. रेगे) has written a lot on the subject of philosophy using formal prose. It sounds tough even for the writer, let alone reader!

But writing on philosophy, in any other form, is even tougher for the writer.

Particularly, if one wishes to deploy quality humor or poetry. The way Woody Allen does in English.

But for the reader, it's easier.

Unfortunately, in Marathi, I have hardly come across such writings.

Pu La imagines that the famous argument between sage Vasishta and sage Vishwamitra- 'Who is Brahmin?' (One: Brahmin knows Brahma, The other: the one who knows Brahma is Brahmin)- took place while both were chewing betel leaf (paans)! Vasant Sarwate (वसंत सरवटे) has drawn a beautiful illustration for it.

It reminded me of Mel Brooks' quote:

Frankly, other than Charvak-darshan (चार्वाक), there is little information in Vinda's book that is not there in Will Durant's 'The story of philosophy' (1926). However, Vinda's usage of abhang (अभंग) format to write on the subject of philosophy was at the edge of innovation.

Vinda had good sense of humour as is obvious from many of his poems. Vasant Sarwate too vouches for it.

I hope, some day, his 'Ashtadarshane' ushers in Marathi's Woody Allen.

In the moth of June 2015, I came across an excellent example (one of the best really) of how creatively philosophers and their philosophy can be presented. 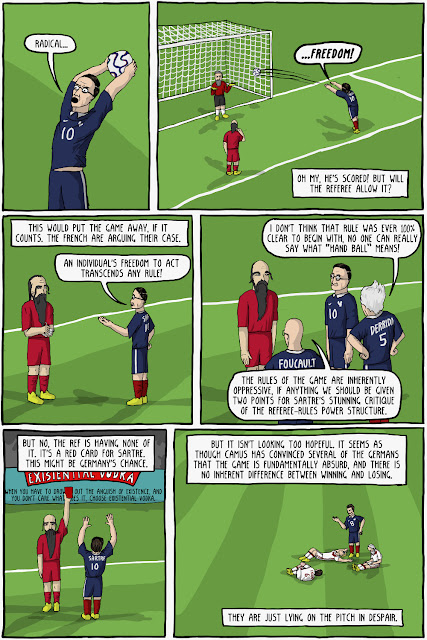 There are four such frames on the website. The above one is the second frame. One of the picture is reproduced below: 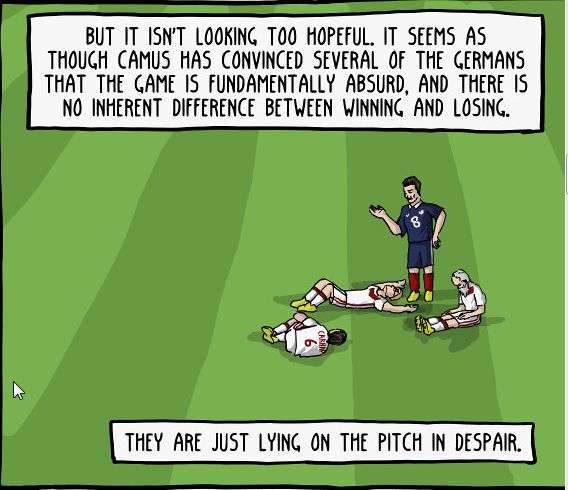 "Camus has convinced several of the Germans that the game is fundamentally absurd. And there is no inherent difference between winning and losing. They are just lying on the pitch in despair."

Or see the one below: 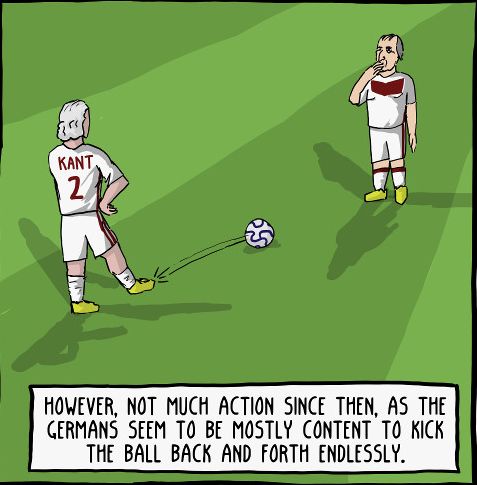 "However, not much action since then, as the Germans seem to be mostly content to kick the ball back and forth endlessly."....and one of the dribblers is Kant!


Every picture is a gem and teaches as well as amuses a lot.
Posted by Aniruddha G. Kulkarni at 9:00 AM 1 comment: Links to this post