I got to see a fair bit of Shrikant Moghe (श्रीकांत मोघे) on TV in Jan 2012 because he was the president of the 92nd Akhil Bharatiya Marathi Natya Sammelan (अखिल भारतीय मराठी नाट्यसंमेलन) that was held at Sangli (सांगली).

(btw- There is no entry in his name in English Wikipedia and just header entry in Marathi Wikipedia as on Jan 24 2012 9:16 AM. Even his profile on The Internet Movie Database is moth eaten.)

I wish he wrote an autobiography. (I don't know if he has already written one and, if not, at his age, one's memory is even more unreliable companion!)

On TV, he was not allowed to even complete some of the sentences, let alone topics!

Now, instead of letting Mr. Moghe complete what could have been a very interesting response, the "expert" interjected with "Purush" (पुरुष).

Now "Purush" is NOT Tendulkar'a play. It is of Jaywant Dalvi (जयवंत दळवी). But the 'expert' forced Moghe to say "Purush" and in the process killed the original point.

I have never seen Moghe on stage. I have only watched video clips of some of his stage performances.

I have always felt that he has been an under achiever considering his talent.

I would have liked seeing Moghe play Sakharam Binder or Bérenger in Eugène Ionesco's 'Rhinoceros'. My guess: He would have been quite competent if not good.

I have always enjoyed watching him in Marathi black & white cinema. Even his small role of lecherous politician-minister 'Anandrao' (आनंदराव) in 'Simhasan' (सिंहासन), 1980 has left a lasting impression on me.

Here is another example.

Eyes that are groomed on today's pervasive anorexia might be offended but look closer and you will be taken in by Moghe's infectious smile. 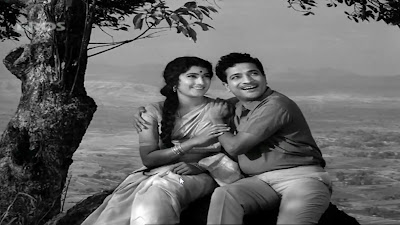 Returning to Mr. Moghe's question to Mr. Tendulkar, I wish to say that there is to life both 'Sakharam Binder' and 'Tujhe Ahe Tujapashi' (तुझे आहे तुजपाशी).

And are they very different to begin with?

(Kakaji: Let it be friend. In jungle there are just two times. When hungry it's eating time and when tired sleeping one.

Acharya: I was thinking this house was behind the times by twenty-four years. But no, it's in prehistorical period. Looks like it has not heard any progress the primitive man has made since.

Kakakji: Wonder what is it? Progress or degeneration!)

Doubts over progress or degeneration? Sakharam Binder (and Vijay Tendulkar) would nod in approval!
Posted by Aniruddha G. Kulkarni at 9:00 AM No comments: