Mahabharat महापीडिया....Mahapedia is NOT the Sum of Just Male Knowledge

William Dalrymple, review of Charles Allen's 'The Buddha and the Sahibs':

"...Thus we hear again the wonderful story of how Jones mastered Sanskrit, a language that he soon realised was "more perfect than Greek, more copious than Latin, and more exquisitely refined than either. I am in love with the gopis, charmed with Krishna and an enthusiastic admirer of Rama. Arjun, Bhima and the warriors of the Mahabharata appear greater in my eyes than Ajax or Achilles appeared when I first read the Iliad..."

"Wikipedia is “like a sausage”, its founder, Jimmy Wales, told a reporter in 2004. “You might like the taste of it, but you don’t necessarily want to see how it’s made.” Back then, the free online encyclopaedia that anyone can edit was an exciting new, scrappy, collaborative utopia. Now it is the most influential source of information in the world...

...Yet when it comes to how it is made, Wikipedia is a colossal failure. Only a tiny proportion of users now edit articles and the overwhelming majority of those editors are male. The most recent survey by the Wikimedia Foundation, the charity that supports but does not control Wikipedia, found that 91 per cent of the editors are More optimistic surveys have put the figure at 84 per cent – but still, Wikipedia has a huge diversity problem men.. Instead of being the egalitarian “sum of all human knowledge”, as Wales had originally hoped, the English version of Wikipedia is mostly the sum of male knowledge..."

"...But the Mahabharata is not the head of a brahmin philosophy accidentally stuck onto a body of non-brahmin folklore, like the heads and bodies of people in several Indian myths, or the mythical beast invoked by Woody Allen, which has the body of a lion and the head of a lion, but not the same lion. True, it was somewhat like an ancient Wikipedia, to which anyone who knew Sanskrit, or who knew someone who knew Sanskrit, could add a bit here, a bit there. But the powerful intertextuality of Hinduism ensured that anyone who added anything to the Mahabharata was well aware of the whole textual tradition behind it and fitted his or her own insight, or story, thoughtfully into the ongoing conversation. However diverse its sources, for several thousand years the tradition has regarded it as a conversation among people who know one another’s views and argue with silent partners. It is a contested text, a brilliantly orchestrated hybrid narrative with no single party line on any subject. It was contested not only within the Hindu tradition, where concepts of dharma were much debated, but also by the rising rival traditions of Buddhism and Jainism..."

(courtesy introduction to 'Mahabharata: A Modern Retelling' by Carole Satyamurti)

Mahabharata is like Wikipedia....How I love this analogy....Next time I edit a Wikipedia page, I will feel different...a part of lineage...


Now, it's impossible to know how many women  contributed to Mahapedia but

"...The text depicts women with powers and privileges they would seldom have again in Hindu literature. Women with multiple sexual partners appear with surprising frequency in the Mahabharata; the text offers us, in four consecutive generations, positive images of women who had several sexual partners (sometimes premarital) seriatim....many of the Mahabharata women are a feminist’s dream (or a sexist’s nightmare): smart, aggressive, steadfast, eloquent, tough as nails, and resilient..." 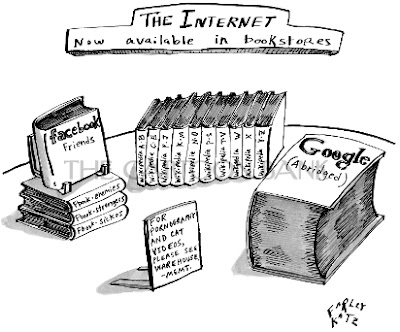 Notice: Wikipedia volumes are standing at the back

Artist: Farley Katz, The New Yorker, June 2012
Posted by Aniruddha G. Kulkarni at 9:00 AM No comments: