What Colour Band-Aids for Dalits?

Many upper-caste Hindus – sympathetic to the plight of the untouchables over centuries- often complain about their inability to ‘understand’ Dalits, their politics, their actions, their thinking, their leaders, their art etc.

They are correct because Dalits now have decided to navigate to their own destiny themselves. They feel upper caste gods, leaders, writers, thinkers, artists, philosophers have let them down.

Shripad Krishna Kolhatkar श्रीपाद कृष्ण कोल्हटकर (1871-1934), arguably 20th century's best writer in Marathi , was an exception. He reminds me in many ways- particularly humour and social sensibilities- of Mark Twain.

”If Mr. Apte could tell the story of misery of backward caste people (Dalits) the way he has told of (Brahmin) women, such a novel would be second in revolutionary qualities only to ’Uncle Tom’s Cabin’”.

Meshram says Kolhatkar’s conscience based bold opposition to the practice of caste brought him in direct confrontation with Lokmanya Tilak लोकमान्य टिळक and N C Kelkar न चि केळकरwho chose to ‘ignore’ challenges of caste instead of addressing them.

Another quality of Kolhatkar was his ability to identify and encourage young talent.
R D Karve र धो कर्वे(1882-1953) – visionary social reformer and practicing sexologist- wrote only one obit in his periodical-Samajswasthya समाजस्वास्थ्य (July 1927- November 1953)- ever. It was of S K Kolhatkar!

Shejwalkar’s writing is brilliant, vision broad, thinking global, language precise but there is only one problem.

He probably never gauged accurately the importance of Dalit-movement led by Dr. Ambedkar to the future of India. Contrast that with V S Naipaul’s description of Dr. Ambedkar’s birthday celebration at Mumbai in his book “India A Million Mutinies Now” (1990).

Shejwalkar is not alone. This blog is indebted to The New Yorker. It has scored many hits and few misses. Here is their biggest miss of them all.

John Updike says:”(During the fourth decade of The New Yorker 1955-1964) the foremost domestic issue of the time was the struggle of the black minority for civil rights, yet people of color are almost totally absent from these cartoons.”

The only exception is this picture... 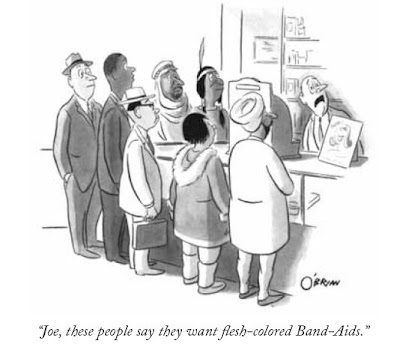