"...“Good prose is like a windowpane,” Orwell wrote. But his—and Strunk and White’s—dream of a prose so crystalline it lets us behold the truth of things unmediated, rather than through the glass of language, darkly, is really a religious yearning disguised as writerly wisdom. It’s a dream of time-traveling back to Eden and speaking the Adamic language in which the signifier and the signified, representation and reality are one. The trouble, of course, is that style, whatever its elements, is artifice, and artifice is authenticity’s foe... "


“... Progress is not an illusion, it happens, but it is slow and invariably disappointing. There is always a new tyrant waiting to take over from the old — generally not quite so bad, but still a tyrant. Consequently two viewpoints are always tenable. The one, how can you improve human nature until you have changed the system? The other, what is the use of changing the system before you have improved human nature? They appeal to different individuals, and they probably show a tendency to alternate in point of time.,,"”


“...And yet for all his fame and stature, Orwell remains elusive. For one thing, he is impossible to categorize. He was a great something — but a great what? Scarcely a great novelist: the prewar novels are good but not very good, and even “Animal Farm” and “1984” aren’t great in the sense of “Madame Bovary.” To call him a great journalist, as many have done, means overlooking plenty of mundane (and inaccurate) political commentary. It’s when he turns to such unlikely matters as boys’ comics and vulgar postcards, as well as to his central subject of politics and language, that he enters the realm of deathless literature.


His politics were likewise sui generis. Although he called himself a democratic socialist, and served with a revolutionary-Marxist militia in Spain, he was in many ways an emotional and cultural conservative...”

“....There are two points to be made here. First, sensitivity to odor is a tic of much of his writing. Second, and more unsettling, it is the smell of humanity that repels him. When he notes the smells of nature, even of the barnyard, it is almost always with approval. In contrast, he is always ready to be horrified by mankind.


Another more repellent thread runs through the book—a kind of quick and casual prejudice against the Jews he encounters. In a coffee shop he sees, “In a corner by himself a Jew, muzzle down in the plate, . . . guiltily eating bacon.” The animallike “muzzle” in that sentence is particularly disturbing. At another point he recounts a tale told by his friend Boris, a former Russian soldier, of being offered the sexual services of a Jewish girl for fifty francs by her father—“A horrible old Jew, with a red beard like Judas Iscariot.” Orwell’s playing with this offhand sort of anti-Semitism appears in some of his other work. It is little consolation that he is an equal opportunity bigot, as when in Down and Out he approvingly quotes the proverb “Trust a snake before a Jew and a Jew before a Greek, but don’t trust an Armenian.”


The fact of the matter is that Orwell was always tin eared about Jews. During World War II, Orwell would write extensively against anti-Semitism, but in the course of doing so he failed to reexamine his own writings of the previous decade. After the war, he had surprisingly little to say about the Holocaust, one of the major events of his time. He remained strongly anti-Zionist throughout his life, but that probably should be seen more in the context of his enduring distaste for nationalism rather than the anti-Semitism of some of his early writings. Even so, his friend the journalist Malcolm Muggeridge would conclude that “he was at heart strongly anti-Semitic.”....”

१. जॉन ग्रे म्हणतात : "Whatever horrors they chronicled, Orwell and (Arthur) Koestler never gave up the hope that humankind could have a better future. It did not occur to them that history might be cyclical, not progressive, with the struggles of earlier eras returning and being played out against a background of increased scientific knowledge and technological power. For all their dystopian forebodings, neither anticipated the 21st-century reality, in which ethnic and religious wars have supplanted secular ideological conflicts, terror has returned to the most advanced societies and empire is being reinvented."

जॉन ग्रे पुन्हा एकदा:
".... In Greece and Rome, India and China, for example, history was understood in cyclical terms as the rise and fall of civilisations. Advances in ethics and politics were real and worth fighting for, but they would always be lost in the course of a few generations since – while knowledge may increase over time – human beings remain much the same. The inherent and incurable flaws of the human animal will eventually always prevail over any advance in civilisation. As I’ve put it in The Silence of Animals, civilisation is natural for humans. But so is barbarism...."

"...He predicted in 1941 alone that: the British Empire would be converted into “a socialist federation of states”; the London Stock Exchange would imminently be “torn down”; Britain’s country homes would be transformed into socialist “children’s camps”; and Eton and Harrow faced immediate post-war closure. He was making claims that were childish even for his time....
.... Orwell’s actual warnings—about homogenization, the destruction of information, a world without wealth and only unlimited powers of the state—are now miles away. If anything, the threats to democracy are the opposite of “Orwellian.”
This is the problem of bringing everything, always, back to Orwell. He has nothing to say about social fragmentation, financialisation, ethnic splintering, unaccountable corporations, offshore kleptocrats, or echo chambers, to name but a few. Instead, he leaves too many political minds forever chasing, Quixote-like, the totalitarian windmill of untrammeled state power. They ignore the real anemic state before their eyes, which struggles to keep up with corporate algorithms, is unable to fulfil its promises, or tax the super-rich.

Orwell was no visionary when it comes to economics, either. Recall his Floating Fortresses in 1984, explicitly designed to eat up the surplus production of a population. His inability to meaningfully reflect on the dynamics of capitalism (beyond moralising condemnation), let alone imagine a consumer society, is a fascinating wooly mammoth frozen in ice from the postwar era. It is a reminder of how utterly written-off by European intellectuals the market economy was immediately after the war—and what a shock the 1950s consumerist takeoff in living standards proved to be... "

वर दिलेले थॉमस रिक्स यांचे अवतरण वाचा आणि, पुन्हा एकदा, बेन ज्यूडा:
"...Orwell’s books, too, are heavily stained with anti-Semitism. His 1933 novelistic impressions and imaginings in Down And Out In Paris And London (where he would regularly visit a Parisian aunt in the cinquième arrondissement) contains constant and violent caricatures of Jews. “It would have been a pleasure to flatten the Jew’s nose,” he recalls. Whilst the Romanians, plongeurs and tramps Orwell meets have names and identities, the Jews are only ever Jews—whether it is “a red-haired Jew, an extraordinarily disagreeable man” he fantasises about punching in Paris, or when he returns to London and sights “a Jew, muzzle down in the plate, who was guiltily wolfing down bacon.” These are not feelings that George Orwell was shy to admit, even in writing. His 1945 musings on the illogicality of anti-Semitism as an ideology goes as far as to ask, “Why does anti-Semitism appeal to me?”
The time-stamp on these musings matter when it comes to judging his reputation as the now bronze-cast moral authority outside the BBC. This is quite different from judging Shakespeare on whether or not Shylock is an anti-Semitic caricature, given that The Merchant of Venice was written at a time when Judaism was a question of peripheral relevance to Elizabethan writers. Orwell first published the year Hitler came to power."

"the secret to Orwell’s popularity is not in the facts of his life, or even in his journalism (though he hardly ever engaged in what we would call reporting), and certainly not in his prophecy. The secret of Orwell’s appeal lies in his rhetoric: everything is simple, everything is right or wrong, and everything—if you only listened to him—can finally be solved." 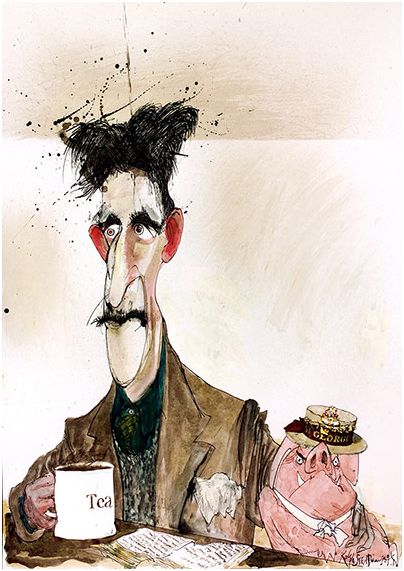 Artist: Ralph Steadman, 1996
Posted by Aniruddha G. Kulkarni at 9:00 AM No comments: