India: A Flex-Printed Nation! Rather than a Painted One

Neal Lawson:"And the thing about outdoor advertising is that you can't not look and you can't escape. Surely we should be able to say enough is enough. The freedom from unwanted and damaging advertising should trump the freedom to sell. If outdoor adverts were banned, our towns and cities would be transformed. We would see more of the sky and our urban landscape. And our minds would have that bit more space for ideas, plans, love or just to daydream. Some sites could be used for great public art, information and inspiring poems and quotes. Not just another airbrushed perfect body meant to make us feel inadequate." (Guardian, April 20 2012)

Balkrishna Vaidya, Bill board painter from Mumbai:
"I will be remembered abroad not here."

"...A cultural conservative in the European tradition, Eksteins takes a dim view of modern art, seeing it as emblematic of disorder, madness, despair, an idolatry that replaces religion with the cult of the artist, sensationalism and the loss of faith in older and more humane traditions....

...Solar Dance is perhaps best read in conjunction with Hugh Kenner’s classic 1968 book The Counterfeiters, which also examines the connection between modernism and forgery. Unlike Eksteins, Kenner celebrates the modernists for their inventive exuberance and sees the impulse to forge as a strategy for keeping alive human agency in the age of mechanical reproduction..."

(review of 'Solar Dance: Genius, Forgery and the Crisis of Truth in the Modern Age' By Modris Eksteins, February 3 2012)

"keeping alive human agency in the age of mechanical reproduction"?

That's what bill board painters do in India.

In my childhood at Miraj (मिरज ) we used to know a few of them. Sharad Apte (शरद आपटे), my father's student, was one such. I have spent hours watching Mr. Apte and others like him work. My father was fond of getting a new nameplate- that was screwed to our door- made every time he or my mother got a new degree...B.A.(English), M.A.(English), M.A. (Sociology)...CPED, B.A., M.A...Even today in his house a nameplate hangs that has all our names and degrees...

I have already mentioned fascinating marriage-halls/temples 'wall-art' of anonymous Miraj artists here. And there is a brilliant example of creativity of India's anon artists during elections.

Flex printing technology is killing board painters but luckily shutters and trucks and some walls still need them.

When I first visited Mount Road in 1980's riding PTC bus no. 23C what hit me most were Chennai’s huge cinematic billboards.

And if I have to choose one image it was of Silk Smitha from the poster of Moondram Pirai, 1982. The late Ms. Smitha has now gone viral with "The Dirty Picture", 2011...it's as if the whole of India is now watching her billboard. 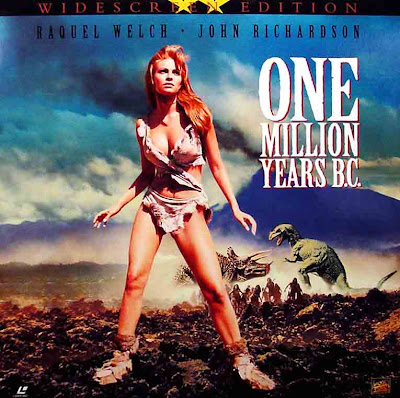 I for once understood why some cine-stars become larger-than-life.

"...Mr. Vedachellam—a billboard artist and entrepreneur—explained to me that his film industry clientele routinely attempted to circumvent censorship by protesting to the authorities that the provocative still photographs featured on billboards were simply taken from film footage already cleared by the censors. The police commissioner’s canny rejoinder to the publicity agents’ appeals, Mr. Vedachellam recalled, was to remind them that these questionable stills appeared on the cinema screen for only a few seconds so viewers would soon forget them, or may not even have quite “seen” them at all. Freezing and enlarging such images, he argued, was a different matter altogether. And displaying them prominently on major thoroughfares would likely result in costly traffic jams and additional accidents. The police routinely censored these images by pasting pieces of white paper over offending portions of the billboards..." 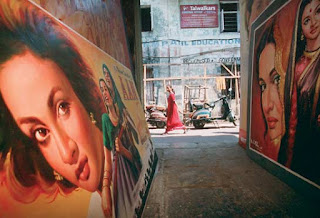 I looked around and found that it was absolutely true. 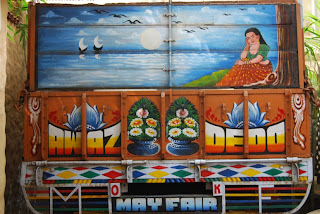 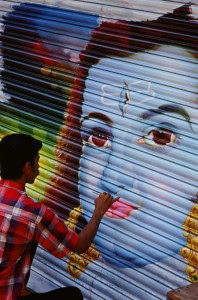