Bring on Bambooque of Avadh Punch because we still are "England Returned, newly-made gentleman & Noisy Jee-Huzoors"

The Economist ((Oct 28th 2004) said:
"In the 1830s, Lord Thomas Macaulay was a member of the British Supreme Council in India. His comments on Indian culture and scholarship still rankle. “The whole native literature of India and Arabia,” he asserted with the confidence of one unable to read any of it, was worth but a single European library shelf. Few Indians would want to stick up for this supercilious English xenophobe."

One can understand imperial arrogance at the height of the empire.

But what about we ‘literate’ natives? Do we think any differently than the Lord? And if so, is that knowledge part of our learning?

Sadly, I don’t think so.

Therefore, I was not surprised but ashamed to learn TODAY- 71 years after its death and 47 years after my birth-the existence of “Avadh Punch”, a weekly started in Lucknow in 1877, that raised wit and humour to new heights. (Source: Wit and Humour in Colonial North India by Mushirul Hasan)

“The Avadh Punch, a weekly from Lucknow, under the stewardship of its formidable editor, Munshi Sajjad Husain, was published from 16 January 1877 till its closure in 1936. Virtually the first Indian newspaper to publish cartoons as we know them today, it provided a platform for some of the greatest comic writers in Urdu literature.

Inspired by, and like the London Punch (1841-2002), it became a household name notable for dignity, geniality of satire and good taste....

Such was the popularity of the Avadh Punch that, by the end of the 19th century, 70 Punch papers/magazines had appeared from more than a dozen cities across the nation. Each of them reflected mainly on British rule from the experiences of over 300 million Indians with a long and proud past, but who were subjugated by force of arms and by commercial and diplomatic duplicity. Equally lampooned were those who abandoned their own inherited cultural and intellectual legacies in preference of Western models.

Wit and humour as pacifist tools of devastation constituted an apt response to the situation.“

“……Born in Masauli, a tiny village in the Bara Banki district of Uttar Pradesh and educated at Aligarh's M.A.O. College, Wilayat Ali (1885-1918) was a product of that era, though perhaps the least known today. One of the countless young men immersed in the impassioned debates that raged in his youth, he wrote mostly in English under the nom de plume "Bambooque". Reflecting the political mood of the age — an active, self-confident spirit — his articles eminently represent the period and ensure to them an enduring quality. His clear-cut convictions on a large number of issues mark him out as a writer with robust common sense. That he has strong personal convictions adds to the charm and force of his writing.

Why was he different from others? In plain and simple terms, he mocked at British rule and ridiculed it in skits and sketches, while many of his contemporary activists held forth from public platforms. His political pursuits were serious, and yet their expression was humorous and satirical. True, he was neither the greatest master of English prose to spring from his community, nor was he expected to generate a large following as a journalist. What he did remarkably well was to stimulate the imagination of his readers in Comrade, the most popular newspaper during his lifetime. And this he did not only in special cases where minds similarly attuned used his articles creatively but also amongst the widest circle of his readership. He did not write much in Urdu, but the few essays that he published demonstrated the skill to express the nuances of a modern mind and sensibility.

…he ridiculed the loyalists who exercised a restraining hand on the Muslim League activists, and made roaring fun of the mongrel culture that had evolved in India under British rule. In much the same vein, the articles published in Awadh Punch had derided the "newly-made gentleman" and their new-fangled ways in a unique and original style.

….Bambooque followed this golden rule. As a result, his approach is patient and fair, his outlook sombre. He was a good observer and writer who learned much from what he saw.

In his gallery of caricatures are the British who brought with them imperialistic arrogance and a powerful sense of cultural superiority. He described the "Title-Hunting" association of "Noisy Jee-Huzoors", the "gaudy survivals of a half-forgotten past, those living anachronisms who have made Oudh." He observed the "England Returned Barrister" desperately aping the sahibs in manners and speech, and pretending to have forgotten his native tongue during his brief stay in England. He describes the "England-Returned" as "the personification of false hopes, the embodiment of extravagant expectations and the incarnation of utterly vain delusions."

Specimens of the Baboo culture in India — from the patwari to the deputy collector and the honorary magistrate — are comic both in their servility to their white superiors and their arrogance towards the common people. Their pliancy, as indeed their sense of superiority, received a great number of attractive illustrations at Bambooque's hand. "The Hon'rary Magistrate", he jibes in one of his columns, "is the apotheosis of intellectual inanity, and an official recognition of native imbecility." What the author is saying is that if a man occupies an important position he incurs a responsibility, and is accountable to the people for his public conduct.

Read, furthermore, the sarcasm poured on the "Natural Leader", the indictment of politicians, and their depreciation. They are portrayed as self-seeking, lacking in courage, accurate judgement, clear expression, and the gift of social compunction and of equanimity. Their public pronouncements abound in platitudes and well-worn expressions, and their public conduct fails to meet the expectations of those they are expected to serve. In short, the politicians seeking official patronage fail to create an impression upon the public mind owing to their defiance of the elementary counsels of good sense. Bambooque's criticism is sharp and pungent, but without being limited to the leader. He extends his criticism to the patronage system developed by the colonial bureaucracy. “ 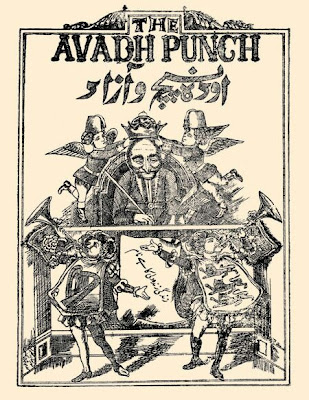 Posted by Aniruddha G. Kulkarni at 12:04 PM 5 comments: Links to this post