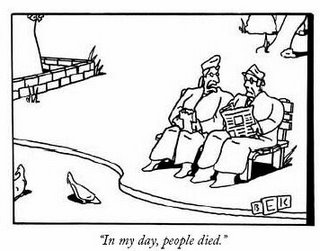 When I grew up in 70’s in a small town in Maharashtra, India, death was ubiquitous. Some one seemed to die all the time in the neighborhood. By all kinds of causes. Boozing, child-birth, jaundice, typhoid, snake-bite, fainting into the water-well, road accidents etc.

You saw old people but not as many as you do these days. Now, they are all over. At a family function, they sometimes seem to out-number the young.

But they seem to be treated cruelly more and more. More so by their so called loved ones.

The most tragi-comic figure I have known is of Abe “Grampa” Simpson, age 83, father of Homer Simpson. He is, according to Wikipedia, "an old, grizzled, periodically incontinent and quite senile figure who lives in the Springfield Retirement Castle, a sad, lonely place filled with demented, crippled and depressed old people. "

I sometimes think creators of Simpsons are heartless when it comes to Grampa. But then look at some practical examples.

Charlie Hauck said “The fact is, mature viewers are threatening the well-being of network television. I have a bold but common-sense suggestion: old people should not be allowed to watch TV.” This is about old people watching TV. And how about they on TV? Television wants just one qualification in you to appear on it, LOOKS. So unless you are a Sophia Loren, you won't look good when old.

When most popular jokes in a culture (such as in Maharashtra, India) are around nature calling or loss of hearing, weakening of bladder control and other body functions is very funny before it is cruel.

So how much longevity is desirable?

He wrote: “Walking and talking get more difficult for my mother every day, and when I phoned to tell her the headline of this story, there was a long pause before she found the words to reply: "I don't recommend it."At 75, she is fighting one of the innumerable syndromes that elderly flesh is heir to.”

Posted by Aniruddha G. Kulkarni at 2:08 PM 2 comments: Links to this post 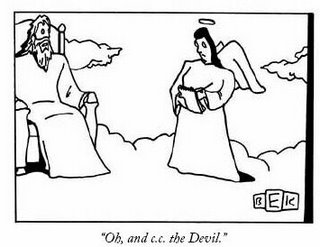 When man left hunting-gathering for farming, organization arose and her favourite child - bureaucracy was borne. Bureaucracy’s most visible hallmarks?

I am sure you have heard jokes like while doing office clean-up- “destroy the original but keep the copy”.

There is also a fear that is lurking in our minds. Is death the end or just another beginning? There is an expression in Sanskrit: “Poornat poornam udachyate”. Zero borne out of zero. Or is it?

So we fear, we might meet the same dreaded bureaucracy wherever we reach eventually.
Posted by Aniruddha G. Kulkarni at 12:28 PM No comments: Links to this post