What is a Real Oriental, Edward Said?

Do only insiders can know the truth about their societies? Edward Said’s much-discussed Orientalism (1978) thought so.

About it, David S. Landes said his classic “The Wealth and Poverty of Nations” (1998):

“Insofar as one uses this claim to discredit the work of intellectual adversaries, it is polemical and antiscientific. But insofar as it points to the instrumental value and power of information, for good and for bad, it makes an important point.”

“…In our own time of "great fear and pain,"Armstrong proposes that we look to the Axial sages for "two important pieces of advice," both of which turn out to be quite uncontroversial: We should practice self-criticism (amen), and we should "take practical, effective action" against excessively aggressive tendencies in our own traditions (amen again).

But after 400 pages of historical argument, the banality of such declarations is staggering.

Yes, we need to learn to see things from other points of view. But once we have done that, once indifference and ignorance and prejudice and other obstacles are cleared away, real differences — political, religious, and cultural — remain. “ (NYT, April 30, 2006)

Wilson sounds as if it is easy to clear indifference and ignorance.

On the other hand, it’s impossible to clear it considering following state of affairs in USA.

Susan Jacoby, author of “The Age of American Unreason”:

“Not only are citizens ignorant about essential scientific, civic and cultural knowledge, she said, but they also don’t think it matters.” She pointed to a 2006 National Geographic poll that found nearly half of 18- to 24-year-olds don’t think it is necessary or important to know where countries in the news are located. So more than three years into the Iraq war, only 23 percent of those with some college could locate Iraq, Iran, Saudi Arabia and Israel on a map.” (NYT February 14, 2008)


“… Most people at the CIA don't speak foreign languages, so communications between and within other nations go untranslated…” (Doug Brown’s review of “Legacy of Ashes: The History of the CIA” by Tim Weiner). (Powells.com February 16,2008)

Why just middle-east? In the West, I feel, quality of scholarship about India was better in 19th century than today. Many India based 'popular' Indian historians don't read Indian language books to source their material.
I have already written about ignorance of likes of V S Naipaul when it comes to India. For the same reason, even many educated and well-off Indians- living in India and abroad- are ignorant about India. 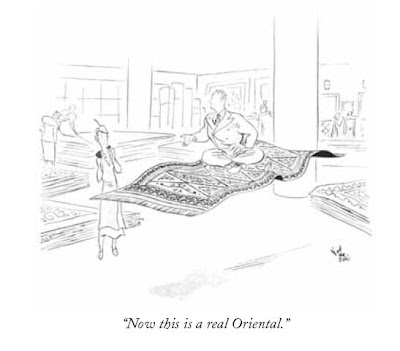 Artist: Ned Hilton The New Yorker 5 September 1936
Posted by Aniruddha G. Kulkarni at 9:00 AM 2 comments: Links to this post