Why some Cartoonists are More Equal

"Rajat Gupta, who ran McKinsey for almost a decade, has been hit with civil insider trading charges for allegedly sharing secret information he learnt as a board member of Goldman Sachs and Procter & Gamble with Galleon Group founder Raj Rajaratnam...

According to Wikipedia Mr. Gupta holds a bachelor of technology degree in Mechanical Engineering from the Indian Institute of Technology, Delhi (IIT) and an M.B.A. from Harvard Business School.

More than a year ago, Feb 19 2010, for the rationale I still don't understand, Tiger Woods's apology was aired live in India on many news channels.

Or maybe I do after reading this:

Frank Rich:"...We’ve rarely questioned our assumption that 9/11, “the day that changed everything,” was the decade’s defining event. But in retrospect it may not have been. A con like Tiger’s may be more typical of our time than a one-off domestic terrorist attack, however devastating..."

(My father often used to wonder, in 1970's, why Marathi newspapers followed lawn tennis by dedicating vast amounts of column centimetres to it.

Then there was no tv and hence most people probably knew tennis only through cinema.)

But the channels never aired Mr. Woods's apology to his clubs.

Now this is where a cartoonist comes in, a very good one like Mike Luckovich. 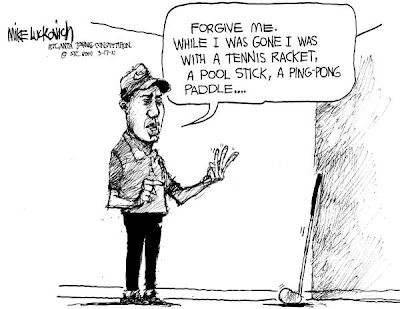 Artist: Mike Luckovich
Posted by Aniruddha G. Kulkarni at 9:00 AM No comments: Links to this post