Bobbing Run-up, the Goggle-Eyes, the Whirring Wrist, the Fizzing Ball...

Here, for whatever worth, is my list of top 5 cricketers South Asia produced so far:

On December 6, 2007, Murali had taken no wickets in England second innings. And then he clean bowled first Matt Prior and later, with 'snake' ball, Ian Bell. It's hard to play his snake ball even in a dream. Ian Bell (and I) thought ball left him safely, only to see it crashing into his stumps.

“At his strike rate of just over five wickets a Test, Muttiah Muralitharan will become, barring misfortune, the greatest wicket- taker in the history of the game in about four years' time. Not bad for a short, slightly built, bow-legged finger spinner with a congenital defect of his right arm…”

In less than six years, Murali on December 3, 2007 claimed his 709th wicket to become world’s number one wicket- taker in test match cricket.

“…More than that, he was a complete breath of fresh air. Sometimes a county dressing-room can become a tired and cynical place and what was once a game can become a humdrum job. Indeed, when Murali arrived, I was injured, sidelined and contemplating retirement as I had lost some enjoyment of the game in the previous six months through constantly battling injury. Murali's arrival reaffirmed to me that cricket is played best when it is enjoyed rather than endured. It was such a pleasure to see a player, a world-class player, clearly relishing the opportunity to bowl and taking pleasure in everything he was asked to do. He simply loves the game.

It is rare to see a great player with so little ego. When the ever- insatiable Lancashire marketing department asked him to dress in lederhosen in front of the members and cameras one day to promote the Warsteiner floodlit series, it was a request that would have been flatly refused by most. But there he was, looking ever so slightly ridiculous, waving his feathered hat, swigging the amber nectar, having the time of his life…”

“…Muralitharan is now 34 years old, with a creaking shoulder, and the strain of carrying his country's attack almost single-handedly for more than a decade will surely bring down the curtain on his career before he returns to these shores again. It is entirely likely that this will be the last time that we will see the bobbing run-up, the goggle-eyes, the whirring wrist, the fizzing ball and the best of batsmen hypnotised, mesmerised and ultimately bamboozled.

Appreciate him while you can: his like will not come again.” 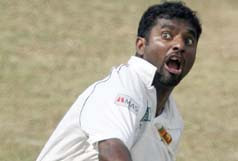 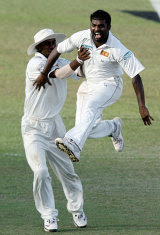 Muttiah Muralitharan in action
(Picture Courtesy- AFP / cricinfo.com)
Posted by Aniruddha G. Kulkarni at 11:45 AM No comments: Links to this post