I was a voracious reader in my childhood. For recreation, I read only Marathi until I was almost 12 or 13. Magazine “Chandoba” (“Chandamama” in Hindi) was one of my favourite. We did not buy it every month because my father did not like it much. Amar Chitra Katha (ACK) was borne in 1967 but I could lay my hands on it much later.

I thought I liked only stories from “Chandoba” but realized later that I also liked accompanying pictures. Pictures of curvaceous women. I also read a lot of Indian mythology that of course has plenty of explicit sex.

Recently ACK completed 40 years of its very successful existence-400 titles, 86 million copies sold. Anant Pai, ACK’s creator, admitted to Times of India (June 29 2007) that imagery of early ACK issues was quite sexy. He said:”…….. our major influences were the sculptures of Ajanta, Ellora…..We may have been a bit over influenced by it….But forget the first 25 titles or so, we have toned it down.”

Pratap Mulick (प्रताप मुळीक) pioneering illustrator of ACK, I hope,  never regretted his following picture of Matsyagandha or Vasavadatta or Satyavati or Shakuntala or who ever she is. Even today it makes my knees go wobbly!

Why regret Mr. Pai? I wish to thank you and Mr. Pratap Mulick,particularly for first 25 titles, and to anonymous illustrators of “Chandoba” for giving pleasure to my eyes. 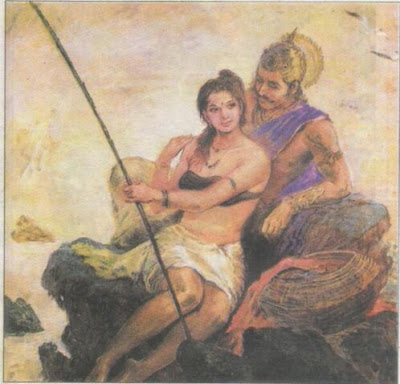 What has your Beer Drinking to do with Groundnut Oil Prices?

I am like a squirrel. Peanuts are my most favourite food. Next only to Payari and Hapus mangoes. I can eat them in any form- raw, roasted, fried, coated, boiled, crushed etc etc. During my school days, I used to relish eating them with a lump of jaggery. Both items would first go in pockets of my half-pants before they went down my throat. Peanuts also are integral to many snacks I relish. Of course, I don’t touch any of them if they have no peanuts or some one like me has picked them before.

My weak liver is the only thing that holds me back from going for a peanut binge from time to time.

I remember one morning in 9th or 10th standard when I had gone to fetch my friend for the school. He was busy with morning chores and I was asked to wait in the drawing room. There I could see what his father and his friend had done previous night. Drinking. There were bottles, glasses- empty, full. But what I found most attractive was a plate full of peanuts. I helped myself with some of them without asking anyone.

When I started drinking or watching people drink, I realized that drinking is just an excuse. Objective of the damn thing is to eat peanuts without feeling any guilt.

All along I knew drunkards ate lots of peanuts but I was not ready for following.

"The problem with groundnut oil is that mills are not getting kernel for crushing. One of the reasons is rise in direct consumption, including as snacks, especially for liquor consumption," says Mr B.V. Mehta, Executive Director of the Solvent Extractors Association of India.

On the other hand, the country has seen its citizens guzzle 105 million cases of beer during 2006 and 115 million cases of Indian made foreign liquor.
Liquor consumption has increased over 50 per cent since 2001 and annual rise in the offtake is seen between three and four per cent.

The scenario with regard to groundnut is that of the 53.5 lt projected output, 18.5 lt are crushed for yielding 7.4 lt of oil, while 19 lt are retained by the growers for sowing. The remaining 16 lt are assumed to be consumed directly. This season, availability of groundnut for direct consumption is seen lower by 2.5 lakh tonnes.
"Peanuts are preferred to be eaten during consumption of liquor as they are cheaper than cashewnuts. Also, rising income levels are seeing corresponding increase in consumption of almost all products, including liquor," say analysts. “

Hey Indian Homer, Marge has more than one reason to crib for your frequent visits to Moe’s Tavern. 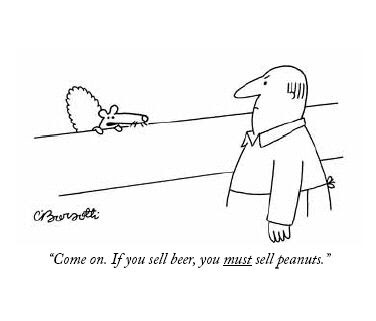 Artist : Charles Barsotti The New Yorker 20 Apr 1998
Posted by Aniruddha G. Kulkarni at 11:59 AM No comments: Links to this post