Rajnikant, Homa has to do. Elixir to Push Back Expiry Still Away

"...One of the biggest puzzles in biology – how and why living cells age – has been solved by an international team based at Newcastle University, in north-east England. The answer is complex, and will not produce an elixir of eternal life in the foreseeable future..." (FT, February 15 2010)

"Call it the Nagavalli effect or, in other words, the fear of death. Superstar Rajnikant has turned to God for solace, following the death of his close friend and Kannada actor Vishnuvardhan.

Rajnikant, still struggling to come to terms with Vishnuvardhan's death, recently conducted the Maha Mrutyunjaya homa (to ward off death) and visited several shrines in and around Mysore to counter the negative energy and evil forces..." 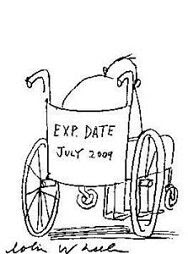 Artist: Colin Wheeler, Spectator
Posted by Aniruddha G. Kulkarni at 9:00 AM No comments: Links to this post