Will the President of India Receive Shankaracharya the way the Pope was in US?

George W. Bush and his family never looked happier on TV than when they received the pope at the White House. They celebrated pope’s birthday there. With more imagination, they could have got him to conduct Mass on the lawns.

BBC claimed it was the grandest reception ever seen at the White House.

I wondered if any head of the state in India would receive any religious leader in similar fashion.

The White House ceremony also partly explained why some of my Hindu NRI cousins and friends have turned rabidly religious since they went to USA.

America is a Christian nation and has been one since its birth. No wonder it’s always working on promising new treatments for what it calls ‘heresies’ around the world. 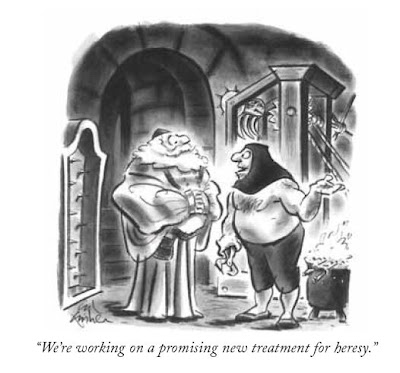 Artist: Ed Fisher The New Yorker 4 December 1989
Posted by Aniruddha G. Kulkarni at 10:00 AM 2 comments: Links to this post