Jaspal Bhatti, Have You Conned Even Wikipedia?

"Tragedy is when I cut my finger. Comedy is when you fall into an open sewer and die."

When I read about Mr. Bhatti's death in a road accident a few minutes ago I thought he was satirising traffic woes of India. So I went to Wikipedia to verify it...

Outside cinema, he was one of the best Indian comedians I saw. Sometimes Doordarshan was worth watching only for his program 'Ulta-Pulta'.

I should have written about his art on this blog when he was alive. He has made so much fun of corruption in India. He of course couldn't have imagined the monstrous proportions the evil has now reached.The joke is truly on us. 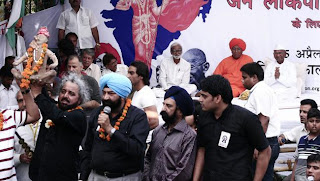 
I always feel that Sikhs as a community get more than fair share of Indian society's affection. For me, the reason is they produce people like the late Mr. Bhatti and Mr. Khushwant Singh. 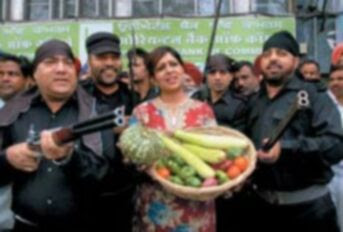 Jaspal Bhatti’s wife Savita Bhatti, guarded by members of the Nonsense Club dressed as commandos, goes to deposit vegetables in a bank locker in Chandigarh on Tuesday April 1, 2008. (PTI)