I have been living in Pune since 1999. Pune they say is a cultural capital of province of Maharashtra, India.

For me culture is first and foremost civility and I think Pune lags behind many other cities of India in that regard. I have seen people here getting ruder and ruder. But even I was shocked to learn this.

Pune: One would never have imagined that serious crimes like culpable homicide, assault and threats would replace squabbles over parking of vehicles in the city. Developments over the past four days only go to prove that parking woes are now leading to serious crimes.

Barely four days ago, a man lost his life allegedly over the issue of parking, in Bibvewadi (my suburb).

In another case, the same night, Prashant Chaudhari (32) of Sanghvinagar lodged a complaint with the Chatushrungi police station (noncognizable offence registration number 5103/06), alleging that a top army officer assaulted him over the issue of parking and threatening him with dire consequences.

These are not stray cases. Police stations of Deccan Gymkhana, Vishrambaug, Faraskhana, Khadak, Swargate, Bund Garden and Cantonment have received complaints of brawls involving motorists over parking of vehicles. "

Pleading guy in the picture has to careful. At Pune, he may never need to park his vehicle again! 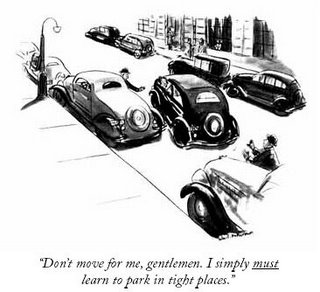