Michel de Montaigne: a Humble and Inglorious Life; that Does Not Matter

"I set forth a humble and inglorious life; that does not matter.  You can tie up all moral philosophy with a common and private life just as well as with a life of richer stuff."


"When I play with my cat, who knows whether she is not making me her pastime more than I make her mine?"


Anthony Gottlieb:
"…Bakewell, Frampton and Kent all stress that the distinctive mark of Montaigne is his intellectual humility. Like Socrates, Montaigne claims that what he knows best is the fact that he does not know anything much. To undermine common beliefs and attitudes, Montaigne draws on tales of other times and places, on his own observations and on a barrage of arguments in the ancient Pyrrhonian skeptical tradition, which encouraged the suspension of judgment as a middle way between dogmatic assertion and equally dogmatic denial. Montaigne does often state his considered view, but rarely without suggesting, explicitly or otherwise, that maybe he is wrong. In this regard, his writing is far removed from that of the most popular bloggers and columnists, who are usually sure that they are right. ..”

"Suppose that Earth was invited to join the Intergalactic Congress of Planets, and its chair-being, Zinglos-Atheling, wanted to know more about our strange species. What one person in history would you choose to best represent humanity? On the one hand, Socrates and Jesus are a bit too saintly (or more than saintly) to be wholly representative; on the other, Charlie Sheen and Lindsay Lohan are, as the saying goes, all too human.You could hardly go wrong by picking Michel de Montaigne..."

There is no equivalent of  Montaigne in Marathi.  Not just that, I guess, his essays have still not been translated into Marathi. What a pity!

The first essays in Marathi were written only in 19th century. The two essay writers from the period that come immediately to mind are Lokhitwadi (लोकहितवादी) and Vishushastri Chiplunkar (विष्णुशास्त्री चिपळूणकर).

("... chaste, mature, strong, flowing language is the big wealth of essays. Lokhitwadi's essays lack it and that is constantly felt. He doesn't even attempt to write grammatically pure language...")

Marathi Vishwakosh (मराठी विश्वकोश) says Chiplunkar was influenced by Joseph Addison and Lord Macaulay. As we have seen on this blog earlier, Tilak/Agarkar were by J S Mill and Herbert Spencer.

For my taste, some of Rajwade's essays are among the best early essays written in Marathi. A few of them still remain very fresh and readable.

However,  I feel none of the gentlemen mentioned above - British or Indian- comes close to the depth, width and literary qualities of Montaigne's work.

I have chosen two examples from  the Frenchman's output.

"Cicero says—[Tusc., i. 31.]—"that to study philosophy is nothing but to prepare one's self to die." The reason of which is, because study and contemplation do in some sort withdraw from us our soul, and employ it separately from the body, which is a kind of apprenticeship and a resemblance of death; or, else, because all the wisdom and reasoning in the world do in the end conclude in this point, to teach us not to fear to die..."

Now how to illustrate this? 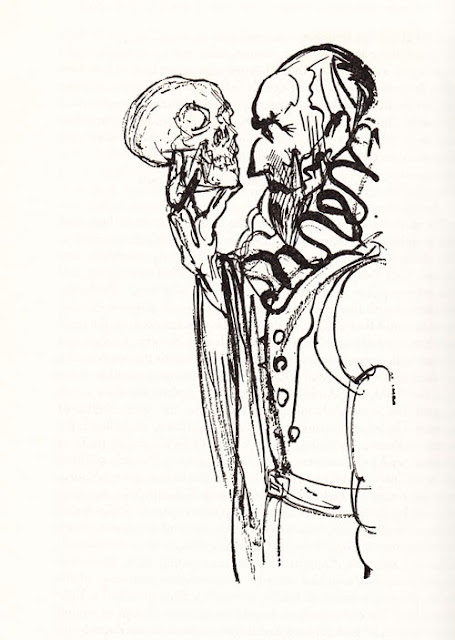 
(George Orwell writes about Dali's art: "Dead faces, skulls, corpses of animals occur fairly frequently in his pictures..." Montaingen's essay then was a good excuse to draw a skull!)

Look at the following picture. Happy couple? Man dealing too lasciviously with the woman? 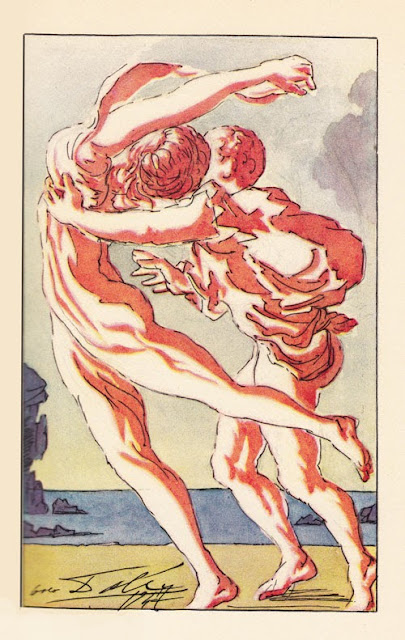 "A man, says Aristotle, must approach his wife with prudence and temperance, lest in dealing too lasciviously with her, the extreme pleasure make her exceed the bounds of reason. What he says upon the account of conscience, the physicians say upon the account of health: "that a pleasure excessively lascivious, voluptuous, and frequent, makes the seed too hot, and hinders conception": 'tis said, elsewhere, that to a languishing intercourse, as this naturally is, to supply it with a due and fruitful heat, a man must do it but seldom and at appreciable intervals:

I see no marriages where the conjugal compatibility sooner fails than those that we contract upon the account of beauty and amorous desires; there should be more solid and constant foundation, and they should proceed with greater circumspection; this furious ardour is worth nothing."

(Chapter V——'Upon Some Verses Of Virgil')

Look again at the picture above. Is the man Dali himself?

This is what Dali writes in his autobiography- "The Secret Life of Salvador Dalí", 1942- about his first meeting with his future wife, Gala:

"          I threw back Gala's head, pulling it by the hair, and trembling with complete hysteria, I commanded:

Orwell adds: "He is somewhat disappointed by this demand, since it is merely what he wanted to do already. He contemplates throwing her off the bell-tower of the Cathedral of Toledo, but refrains from doing so."

After reading this, the question that haunts me : "What happened next to the lady in the picture?