Some experts regard Lakshmi as a pre-Aryan goddess just like Yakshis.

"You will find them everywhere, as sculptured figures of women hanging from a tree laden with mangoes, on the gateways to Buddhist stupas, adjacent to Jaina tirthankaras as exquisite bas-reliefs on the rock faces of hills, in wayside shrines, as terracotta figurines and stucco idols, as beautiful bronzes elsewhere, and as murals in temples. They are yakshis, popular folk goddesses of pre-Aryan days who metamorphosed into protective deities during the time of the brahminical religion and later as female attendants of Jaina tirthankaras. Yakshis are also celebrated deities in the Buddhist pantheon.

The history of the yakshi cult in India is a fascinating one. Yakshi sculptures have been found in Mathura in Uttar Pradesh; Didarganj and Basarh in Bihar; Bhopal, Sanchi and Khajuraho in Madhya Pradesh; Ellora in Maharashtra; Udayagiri and Khandagiri in Odisha; Tiruppanmalai, Vallimalai, Anaimalai, Tirumalai, Samanamalai, Sithamur and Sitharal in Tamil Nadu; Aihole and Shravanabelagola in Karnataka; and Nagarjunakonda, Kondapur, Peddapur and Amaravathi in Andhra Pradesh. About 50 bronze statues of yakshis have been found in different parts of India..." 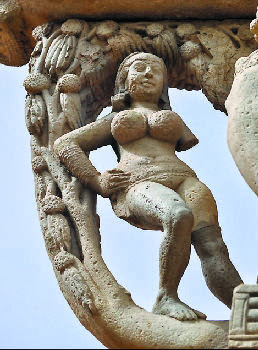 "The Sanchi Stupa in Madhya Pradesh has eight yakshis sculpted on its four gateways. Since yakshis are associated with trees, these yakshis are shown standing under the mango tree or other trees or a banana plant. While the Sanchi stupa itself was erected by Emperor Asoka (third century B.C.), the Sungas renovated it by erecting the railings in the second century B.C. and the Satavahanas built the four gateways circa the first and second century A.D. These yakshis, two each on each gateway, look sensuous and realistic."


"This large plaque is made of baked straw-tempered clay, modelled in high relief. The figure of the curvaceous naked woman was originally painted red. She wears the horned headdress characteristic of a Mesopotamian deity and holds a rod and ring of justice, symbols of her divinity. Her long multi-coloured wings hang downwards, indicating that she is a goddess of the Underworld. Her legs end in the talons of a bird of prey, similar to those of the two owls that flank her. The background was originally painted black, suggesting that she was associated with the night. She stands on the backs of two lions, and a scale pattern indicates mountains.


The figure could be an aspect of the goddess Ishtar, Mesopotamian goddess of sexual love and war, or Ishtar's sister and rival, the goddess Ereshkigal who ruled over the Underworld, or the demoness Lilitu, known in the Bible as Lilith. The plaque probably stood in a shrine.

The same goddess appears on small, crude, mould-made plaques from Babylonia from about 1850 to 1750 BC. Thermoluminescence tests confirm that the 'Queen of the Night' relief was made between 1765 and 45 BC."