Maureen Dowd writes “The Nepotism Tango” (NYT September 30, 2007):”…. 116 million Americans — nearly 40 percent of the nation — “have never lived when there wasn’t a Bush or a Clinton in the White House….When asked by Tim Russert at the New Hampshire debate about the d-word, as Poppy Bush calls it, Hillary replied: “I’m running on my own. I’m going to the people on my own.”

“…These days, it is tempting to argue that America is becoming a monarchy in the guise of a republic…

Walter Bagehot, a 19th-century editor of The Economist, argued that people like to see a “family on the throne” because it “brings down the pride of sovereignty to the level of petty life”. Similarly, American politicos chart the clash of great families and their retainers. Biographers probe the psycho-dynamics of presidents' personal relationships. Did “43” invade Iraq as part of an Oedipal struggle with “41”? Will Hillary take revenge on her philandering husband by outperforming him in the Oval Office? And lowbrow journalists compete with each other to reveal what goes on behind the glittering façade of the White House…

Isn’t this true of India too?

“quasi-hereditary political elite, cocooned in a world of wealth and privilege and utterly divorced from most people's lives “.

Other than the spectacular rise of Mayawati nothing has happened in Indian politics, for a long time, that gives me a hope.

For instance, all FIVE major political parties in Maharashtra are nepotic to the core and look & sound the same. Eerily they bring to my mind images from George Orwell’s Animal Farm:

“The pigs and farmers return to their amiable card game, and the other animals creep away from the window. Soon the sounds of a quarrel draw them back to listen. Napoleon and Pilkington have played the ace of spades simultaneously, and each accuses the other of cheating. The animals, watching through the window, realize with a start that, as they look around the room of the farmhouse, they can no longer distinguish which of the cardplayers are pigs and which are human beings.” 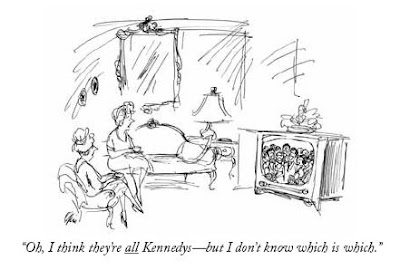